Harpers Ferry, West Virginia squats at the intersection of the mighty Shenandoah and Potomac Rivers and also at the intersection of both history and adventure. That critical, yet perilous location is both the reason Harpers Ferry exists, and why it has played such an important role in history. In Colonial Days, settlers recognized the power of these rivers and established mills and industry in Harpers Ferry (named after Robert Harper and his ferry across the Potomac.) After becoming President, George Washington, who had visited the area during his days as a surveyor, established a Federal Armory in Harpers Ferry.

It was this armory which attracted the attention of abolitionist John Brown in the pre-Civil War days. In 1859, to strike back against slavery, John Brown led a raid on this arsenal, holding his ground before being apprehended by none other than Robert E. Lee, but more on that later.

Once part of Virginia, the town sits at a crucial location at the dividing line between the North and the South. Due to this perilous position, the town changed hands eight times during the Civil War, which is less than nearby Winchester, VA, which was exchanged 72 times!

The fate of this small, scenic town has risen and fallen with the flow of the river. Its early industrial hub caused it to prosper, but vicious flooding dampened the success of the town. While the armory brought it back, the arrival of the B&O Railroad made river and canal transport less critical. The railroads also brought tourists to this scenic town, but floods and the Great Depression washed away its popularity once again. 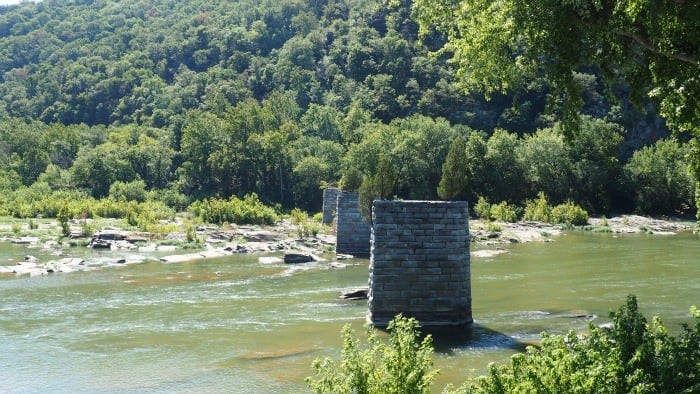 Today, the river and its scenic setting again attracts tourists, as does its historical significance. Here adventurers can go white water rafting, river tubing, fishing, zip lining, and rock climbing. Harpers Ferry is also the home to the Appalachian Trail Conservancy, and the approximate halfway point on the Appalachian Trail (AT). As one of only a few towns that the AT passes directly through, hikers also enjoy this way station for a chance to step back into civilization before continuing on their treks. 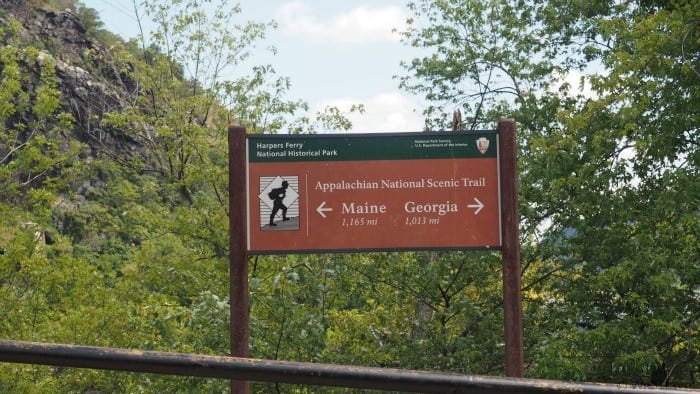 It was primarily the history and Harpers Ferry National Historical Park that drew us to Harpers Ferry. Not only were we able to round out some of the historical sights we took in on our two-week road trip through Virginia (including Jamestown, Williamsburg, and Monticello), but we were also able to check another state off of Hannah’s list of visited states.

Our first stop was the Visitors’ Center at the Harpers Ferry National Historical Park. I thought I needed to allocate time to explore both the national park and the historical town, but I soon learned they are one and the same. The park is embedded in the town and the modern town skirts around the original village. The Visitors’ Center is really just a place to park for free and take the courtesy shuttle bus down to the Lower Town. 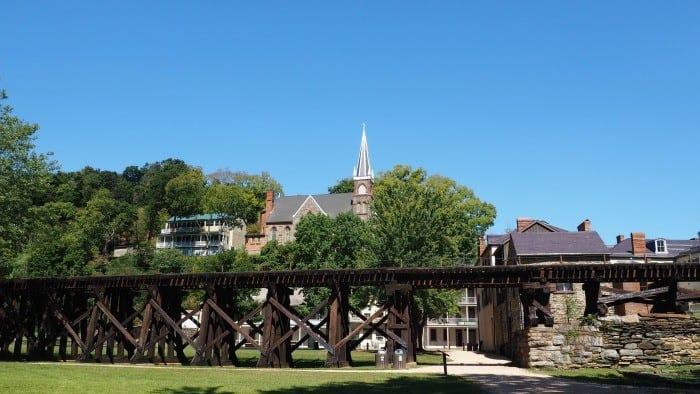 On the shuttle, we got a brief introduction to the history of Harpers Ferry, from its beginnings in 1747 when Mr. Harper from Philadelphia settled there and opened a ferry crossing. We were able to tour Harpers Ferry with a local Park Ranger, but if you are willing to read up on a bit of history either before you go or in the various exhibits, you can easily explore on your own.

We were two of the park’s 250,000 annual visitors. Harpers Ferry has been attracting visitors for over 200 years, with illustrious visitors such as George Washington and Meriwether Lewis of Lewis & Clark.

The park itself has over 20 miles of hiking trails, but if you are interested in history, you’ll want to start at the Visitors Center on Shenandoah Street. As you walk along Shenandoah Street, you can stop in to the bookshop at the Harpers Ferry Historical Association, the Information Center, and a few of the other self-guided exhibits. At the end of the street, you’ll find John Brown’s Fort.

The event that put Harpers Ferry in the history books happened in October of 1859. Abolitionist John Brown from Kansas came to Harpers Ferry because of the Federal Armory and arsenal. With him came 21 followers, including five free black men. At the time, Harpers Ferry was part of Virginia, the largest slaveholding state in the south (West Virginia didn’t split off until 1863.) As part of a plan to arm slaves, Brown and his followers attempted to capture the armory and during gun battles in the street, four townspeople and ten of his followers were killed.

Brown took refuge in a fire station, now called John Brown’s Fort. He holed up there until 90 marines, led by non-other than Robert E. Lee, arrived to negotiate his surrender. When negotiations failed, the marines stormed the tiny building and John Brown and four others were arrested. He was later put on trial, found guilty and hung in nearby Charles Town.

Just a short year and a half later, the Civil War broke out and Harpers Ferry was faced with more turmoil, starting with the Federal troops burning the arsenals when Virginia seceded. During the course of the war, Harpers Ferry changed hands eight times, held 80 percent of the time by Union forces. After winning Manassas in 1862, Confederate General Stonewall Jackson set a triangular trap around Harpers Ferry in order to capture the Union soldiers stationed there. Jackson captured over 4,000 prisoners, representing the biggest surrender of the Union Army in the Civil War. Two days later, the Confederates surrendered at Antietam.

After the war, the Freedman’s Bureau helped feed, clothe and shelter the over 30,000 slaves in the area. John Storer from Maine donated $10,000 to create a desegregated school, which later became Storer College.

Even after soaking in all this history, there is still more to be seen. But before you go, ask a ranger for a pack of Harpers Ferry trading cards. Apparently they are available at all Civil War National Parks — but you have to ask for them! 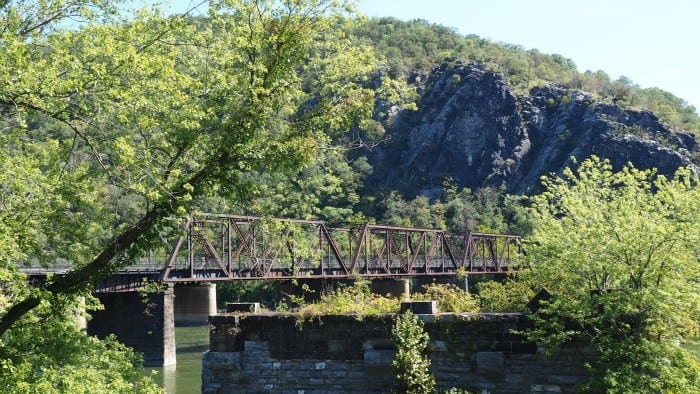 As we climbed High Street, the historical sites gave way to shops, inns, and restaurants. Even though a terrible fire destroyed a number of shops earlier this summer, they are rebuilding and all the surrounding shops are still open. We wandered in and out of gift shops, some catering to hikers coming off the Appalachian Trail. Our favorite shop was True Treats Historic Candy. Unlike any other, this shop claims to be the only historic candy store in the U.S. Arranged by time period, we browsed displays of candies representing eras back to the 1700s. There are also plenty of places to stop for lunch, but we had to try Hannah’s Train Depot. Not only did the barbecue from the outdoor smoker smell delicious, but come on, it was called Hannah’s! The barbecue was tasty and the portions were huge — definitely worth sharing as we had enough leftovers to feed two more people.

But Harpers Ferry is not just about history. Its setting at the intersection of the Potomac and Shenandoah Rivers is quaintly beautiful and captivating. To fully enjoy the beauty, walk out to the Point for views of the river. From here you can walk across the river using the pedestrian walkway on the old railroad bridge and hike up the opposing hill or riverbanks. You can also walk down to the river on the Harpers Ferry side and skip some stones or roll up your pant legs and wade in the water when the river is low. 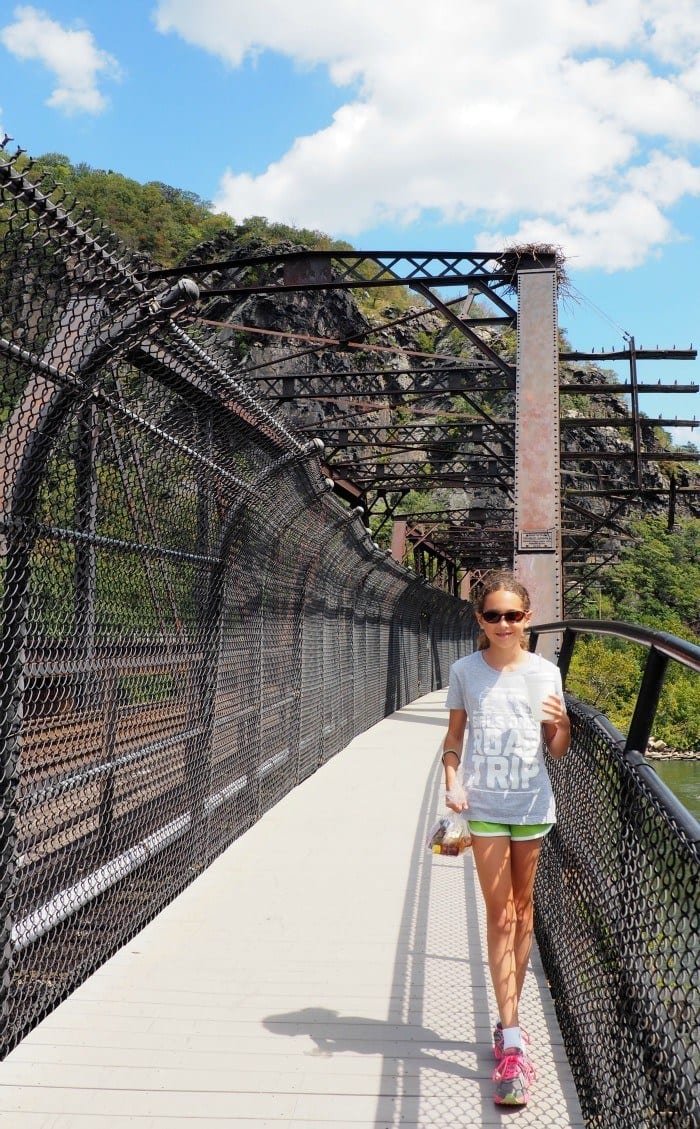 For those looking for more adventure, you can cross over to Purcellville, Virginia to the Harpers Ferry Adventure Center. We stopped in to visit and we were bummed that we didn’t have time on this trip to take advantage of some of their offerings — although we would need at least a weekend to do everything they have to offer. Luckily the Adventure Center has its own campground and cabins so you can stay on site. The Harpers Ferry Adventure Center offers white water rafting, river tubing (both white water and flat water), zip lining, kayaking, canoeing, fishing, hiking, segway tours, an aerial adventure park and even a jumping pillow. 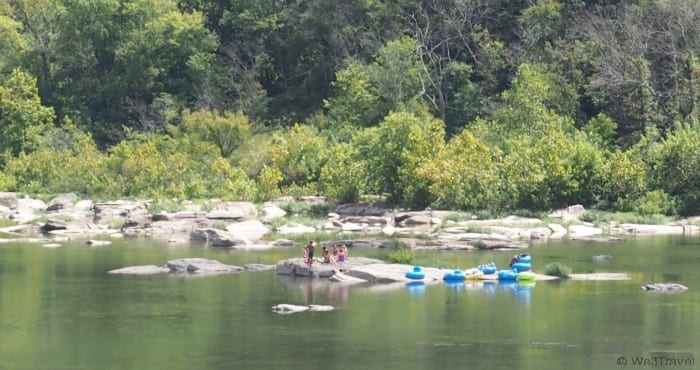 There is more than enough in Harpers Ferry to warrant a visit and we hope to make a return trip. We were very taken with this small town and its natural beauty. I’d like to visit in the spring or early summer when the river is really flowing and we can finally get in some river tubing, or in the fall when the foliage is at its height. 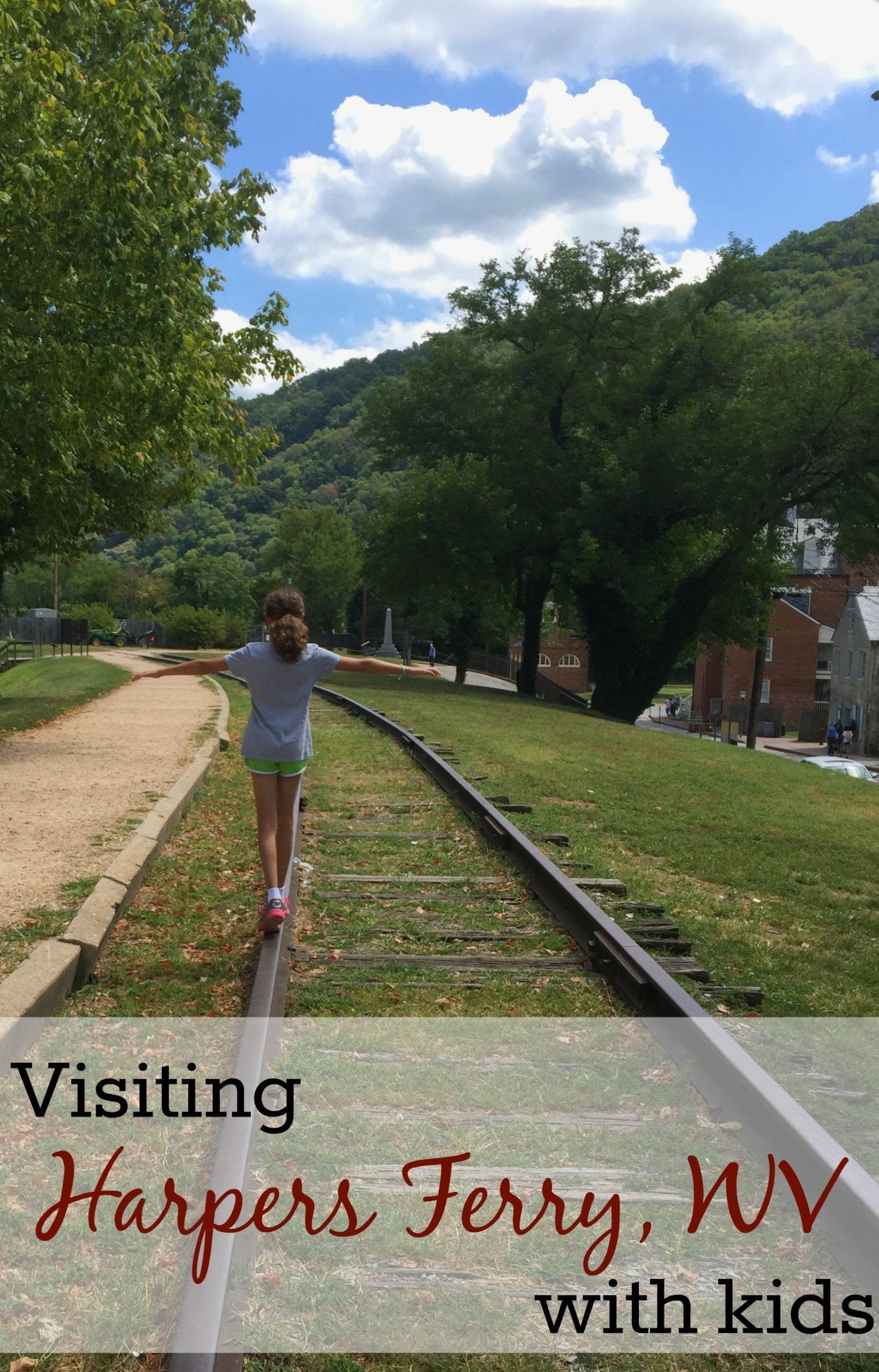 Note: Our entrance and tour of Harpers Ferry National Historical Park was provided by the National Park Service. All opinions are our own.

2 thoughts on “The Intersection of History and Adventure in Harpers Ferry, WV”