Have you ever laid on the ground looking up at the sky and wondered what it would be like to have a gliding experience through the sky like a bird, floating on the puffy clouds? In that idyllic daydream, it seems so peaceful, magical even. When I was a little girl, on our drives home from my grandmother’s house in Vermont, I would sometimes see hang gliders jumping off a mountain and soaring through the air like prehistoric birds. It is something I’ve always wanted to try. When I was in college, my friends and I used to go to the Outer Banks in North Carolina and I remember that they once went hang gliding off the giant dunes near where Wilbur and Orville took their first flight. At the time, I was a poor grad student and couldn’t afford it and I haven’t had an opportunity since. So when Hannah and I were in the Finger Lakes in New York last summer and the opportunity arose to take a ride in a glider plane in the Soaring Capital of America, I jumped at the chance. I thought a glider plane would feel even more secure and less intimidating than stepping off a mountainside with the need to trust the contraption I was harnessed in to keep me in the sky. I may have miscalculated.

While Hannah was reserving judgment on whether or not to participate until we arrived and she could scope the situation out herself, I was eagerly anticipating my ride. That is, until I stepped up to the plane and realized just how small it really was…did it even come up to my hip? Then I was told I was going to sit up front, while my trained pilot sat behind me. Great…just me and the sky…covered in a claustrophobia-inducing glass dome like one of those toys you win from a gumball machine all crammed into their plastic bubbles. I swallowed deep and reminded myself of my desire to try new things, while trying to quiet that voice in my head that has become even more of a scaredy cat as I age (remember my lack of success flyboarding?)

And then my pilot said these words to me that flicked a switch in my brain from nervous anticipation to downright fear. “You like roller coasters, don’t you?” he said. “NOT AT ALL!” was my reply. Ever since I felt my skinny six year-old body slipping under the bar as the Runaway Train curved over the snake-infested swamp at Six Flags Great Adventure, I’ve been petrified of roller coasters. When I was twelve we took our only family trip to Disney and made a beeline for Space Mountain (my mom had our day planned out.) At the end of the ride, she wasn’t sure if I had passed out…but I was just too terrified to even scream. As a teen, I would stand in line with friends and when it was our turn to board, I would scamper across the car and shout out “see you guys at the end!” as I made my way to the exit. I was even nervous on the roller coaster at Legoland! So, no, I do not like roller coasters. I’ve even become a nervous flyer recently and break out in a sweat when we hit turbulence. What the heck was I thinking?? But I didn’t come this far to not go through with it. Plus, I try to set an example of courage and strength for my daughter and I had hoped this was going to be a fun experience for us on this mother-daughter trip, like rock climbing together was on our trip to Oregon. Of course, I had also assumed we could go up together…not realizing at first that these TINY planes just have room for the pilot and the passenger. But there she was, now eagerly looking forward to her turn, always willing to try things and looking on the bright side, so I was not backing out.

Before I knew it, I was harnessed in and we were up…up…and away. See me clinging to those straps? I’m not sure I fully let go until we were safely back on the ground. There is a reason why I don’t have that many pictures from the sky, I just couldn’t let go long enough to take the pictures. Sometimes I couldn’t even open my eyes. I remember the pilot asking if I wanted to take any pictures and I just replied, “yes…if I can let go long enough.”

The acceleration down the runway behind the towplane when you are so close to the ground is definitely exhilarating. Soon we were in the air and I saw the cable connecting us to the towplane and couldn’t help thinking about how little there was keeping us in the air. Yes, I had been informed of the extensive training that glider pilots go through before they can take a passenger up and I know a little about physics, but that all exists in the logical side of the brain. At that point my brain was being overwhelmed by the emotional panicked side. The next thing I knew, my pilot was letting me know that the tow plane was going to disconnect the cable and I would hear a clunk and feel a drop when we released but he would do his best to keep things as smooth as possible. After that warning I promptly shut my eyes and only opened them a squint to see the tow cable snaking through the air. 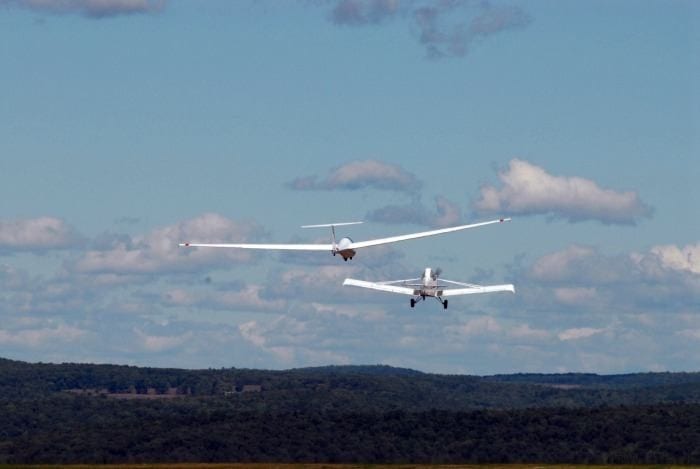 But once we were gliding, it was actually very calm. It wasn’t as quiet as I thought. I guess I hadn’t thought about the wind rushing by as we moved through the air, but it was peaceful. If I could have made myself relax, I’m sure I would have enjoyed it. When the pilot offered to cut the usual 20 minute ride short, I waffled for a minute, and then took the easy way out and asked him to land. I regretted that decision as I think if I had stuck with it, I could have found some inner calm as long as it wasn’t too bumpy. 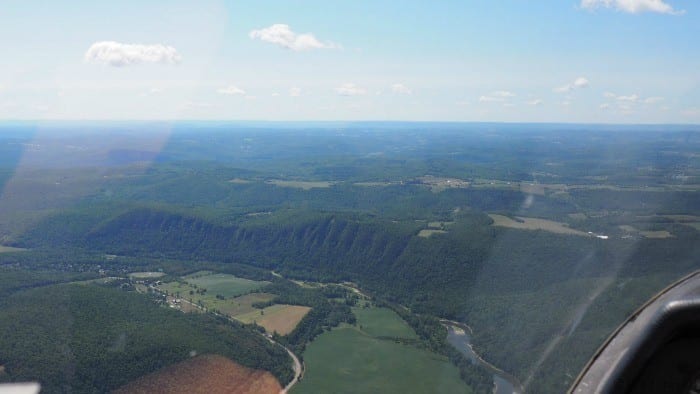 On the way down I had two main thoughts…don’t look at the ground rushing up to meet us…and I want to tell Hannah what this is like before she decides whether or not to go. Unfortunately, as we were landing, her plane was taking off and all I could think was…there goes my baby! My stomach stayed in knots and my legs kept shaking until she was safely back on the ground. I knew from her happy wave as she was landing that once again, my girl had proven herself braver than me and we had once again created a memory that will stick with her. But I’ll let her tell you about it herself.

The following was written by Hannah, age 12.

As I climb into the passenger seat of the glider, thoughts fly around in my head like agitated pigeons. I’m gonna DIE! This is gonna be awesome! Calm down! I can’t! As I try to sort them out, I buckle myself in and the glass cover of the cockpit comes down, separating me from the outside world. I see the tow plane ahead of us start to move as my pilot introduces himself as Moe. I feel the runway drop away under us, but can’t see because my eyes are shut. 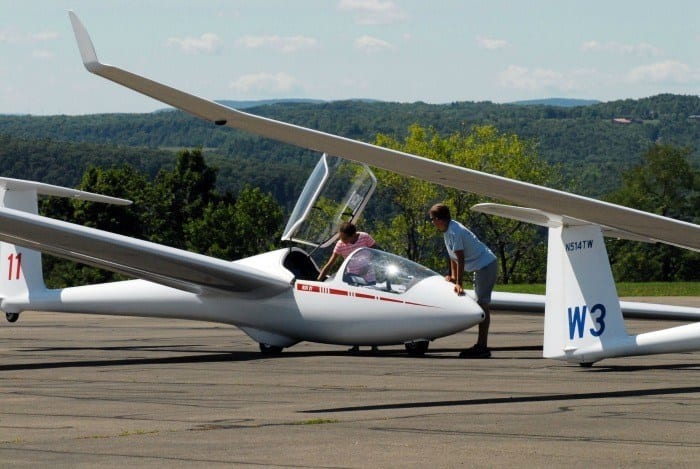 I gather up the courage to open my eyes after a few seconds, but what I see makes me blink in surprise. I can see rivers and fields and buildings scattered across the landscape, and I can see the blue sky, dotted with clouds. It took my breath away. Don’t get me wrong, I was still terrified out of my wits, but I was beginning to enjoy it too. 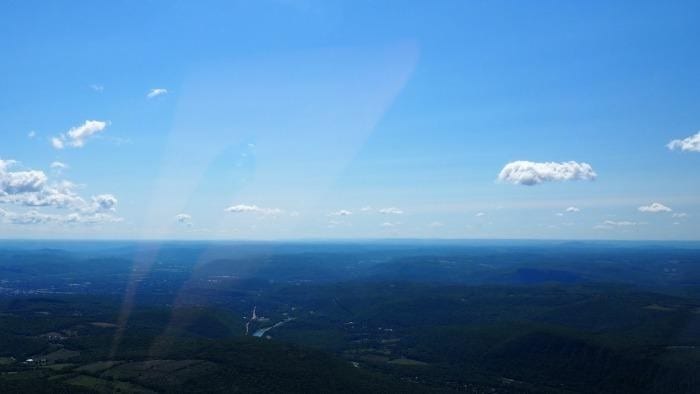 I felt a jolt as we disconnected from the tow plane and watched the tow plane turn back to the landing strip. I felt a distinct difference once we were gliding from when we were ascending. When I let go of my fear, I felt like a bird, soaring on the air currents. It felt like I could see forever, see the edge of the earth. 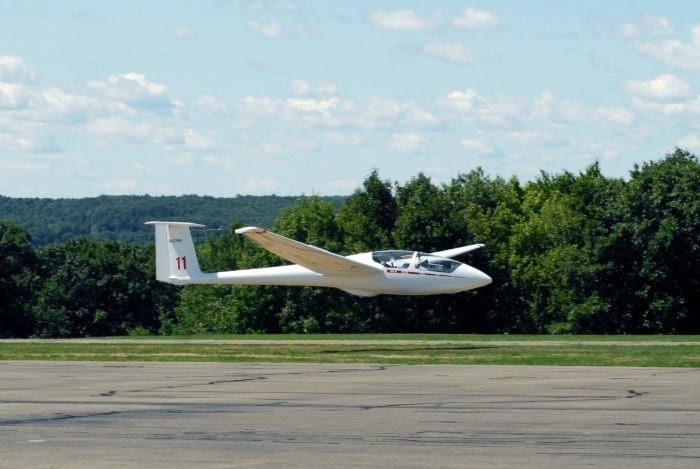 All too soon we touched down on the runway. As I climbed into the golf cart that took me back to the main building, I had to calm myself down, let go of the nervous exhilaration and joy that inhabited me on the glider. 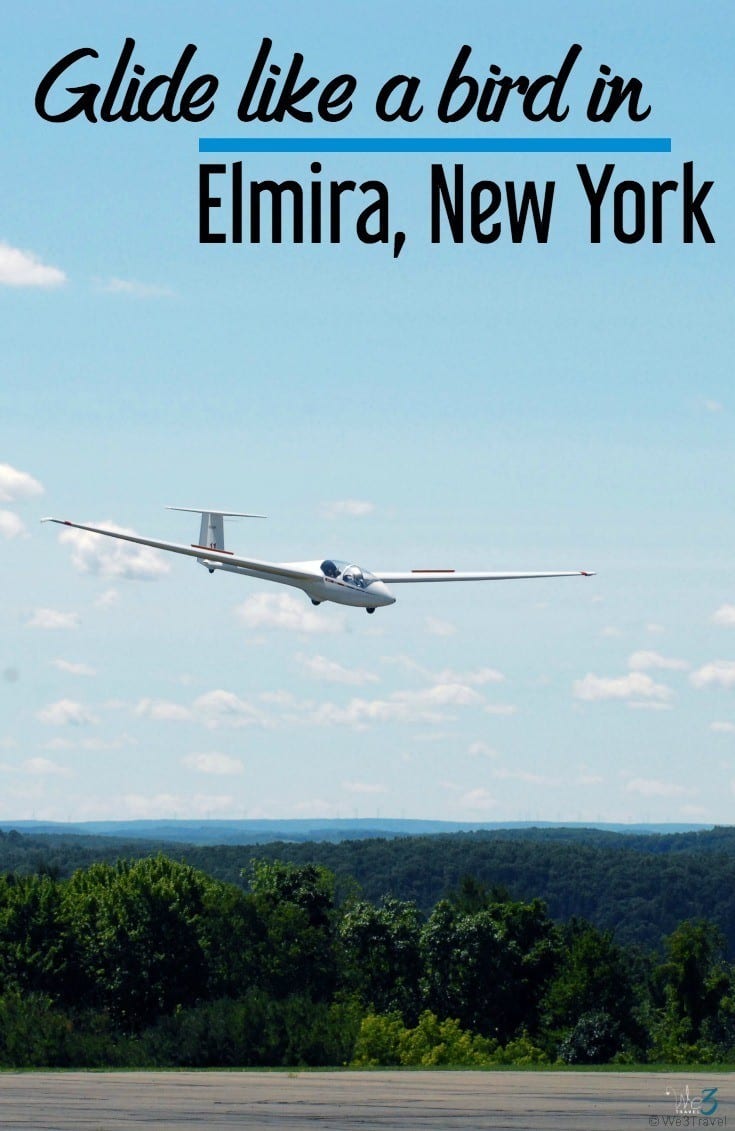 Note: Our rides were hosted by Corning and the Southern Finger Lakes Tourism and Harris Hill Soaring Corporation for purposes of this review. You can always trust that I provide my honest opinion about all experiences.