When I was in Rome last summer, I kept peppering our guides with questions about things I should or shouldn’t be doing if I didn’t want to look like I had a giant “tourist” sign hanging over my head. Chances are, I’m not passing for a true Roman anytime soon but one of our tour guides from Overome offered to help me (and future tourists) out with a few tips on how to not look like a tourist in Rome. Here are her suggestions…

Conventional wisdom says, “when in Rome, do as the Romans do!” I’m sorry guys, but it’s just not that easy.

Look at me, I’m 31 years old and I was born in a small village in Central Italy, only 50 km south of Rome. I studied in Rome for many years and, as an art historian, the city and its beautiful treasures have always been my obsession. I’ve worked in Rome as a tour guide for the last 5 years and, three years ago, I decided to move to the Eternal City. I didn’t want to move to the suburbs; I was ready to pay the high rent just to feel “like a Roman.”

So now the Coliseum is just 15 minutes away from my apartment and my day starts with a “cappuccino” and a “cornetto” in a bar that’s right in front of Basilica St. John in Lateran. Nevertheless, I still don’t feel like a “native.” I think that there could be a special gene in the Romans’ DNA: if you don’t have it, well, don’t even try!

I know that, for a visitor, it is embarrassing to make a faux pas and stand out as a tourist, but it’s really hard to avoid this type of humiliation… or is it? If you’re coming to Rome and you want to try, just let me give you 10 easy tips to avoid looking like a “legal alien!” 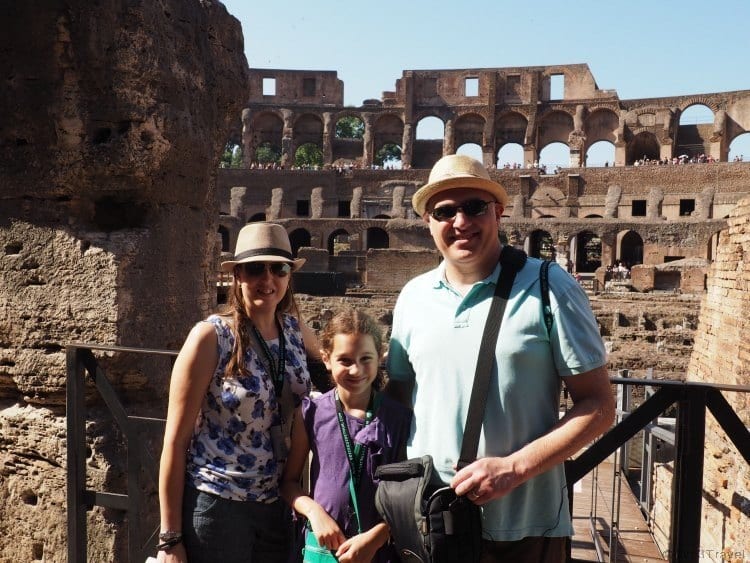 Since Italians are much friendlier than the French (YES WE ARE!), speaking Italian doesn’t seem like the hardest thing to handle, so you try to start a conversation with a native because you know a couple of Italian words.

Well, you might THINK you know those words but then you stop a Roman, because you might need help with your map, and that “Scusi” resounds in your mouth like “Excusas”, or perhaps your pizza has just arrived and you start with “Grazie!” but the pronunciation is the typical “non-Italian” gracias.

Let me tell you two things: adding an “s” at the end of each word could work in Spain but not in Rome! Furthermore, the final “e” in the word “Grazie” should read as an “a” so that “Grazie” might sound like “gratze-a” or something like that.

HAVE A CAPPUCCINO — IN THE MORNING

I worked in a restaurant for six years when I was a student. I still feel a shiver run down my spine when I think about all those tourists asking me for a cappuccino as an appetizer.

Let’s make it clear: in Rome, you cannot mess with food. The Romans have a certain order to things, a sort of ancestral ritual that can’t be changed. So, if you like “cappuccino,” you may have it in the morning but NEVER in the afternoon or evening (which is even worse!)

On the old Vatican coins, there was a Latin motto that in English means “it’s better to give than to receive.” Since in the Vatican City there are no taxes, it looks like that motto was a suggestion for the non-Vatican citizens!

In Rome you will find the same contradiction in regards to tipping. Tourists, especially those coming from US, always feel obligated to tip. The typical “American question” is: “what is the right percentage to tip in a restaurant?” Get ready to hear this, but there is no right percentage and I’m about to tell you something that is going to sound even more shocking: Romans don’t tip.

If you check your bill you will see a charge for “servizio,” which means service is included. But here is the contradiction — even if the Romans themselves don’t tip, they like the tourists because they always do. I know, it makes no sense, but if you don’t want to look like a tourist, don’t tip.

NO AIR CONDITIONING? GET USED TO IT

The weather in Rome is sunny, warm, and humid and not many museums or restaurants have air conditioning. The Romans don’t mind, but tourists do! You can’t imagine how embarrassing it is when, at the end of each tour at the Vatican Museum, there are those sweating faces and those eyes silently asking me: “what’s wrong with you, aren’t you hot?” I don’t have answer. The Romans just don’t like air conditioning, that’s all. So, you are just going to have to deal with it.

NO FLIP FLOPS OR SHORTS 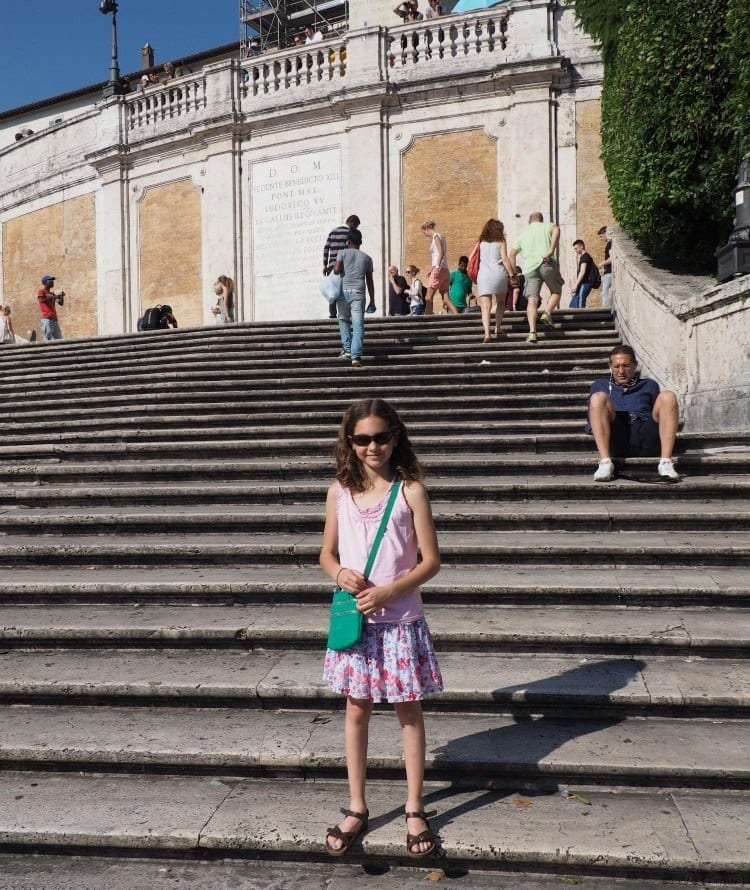 If you’re visiting the main archeological areas, you have a 10 ton backpack on your shoulders with sunscreen, food, drinks, guide books, maps, a second pair of shoes and God only knows what more.

SPEAKING ITALIAN WITH YOUR HANDS AND VOCAL CORDS

I’ve already taught you how to pronounce “Scusi” and “Grazie,” but good pronunciation is not enough. If you’re not using your hands and your loudest tone of voice, you will always look like a tourist.

Tourists are the ones whispering on the bus or in restaurants, with their hands in their pockets while the Romans are those giving strength to their words with their hands and ALWAYS shouting. What is the typical Roman gesture? Join the tips of your fingers and shake your hand up and down during the whole conversation: very “Romanesque!”

GO WITH THE FLOW 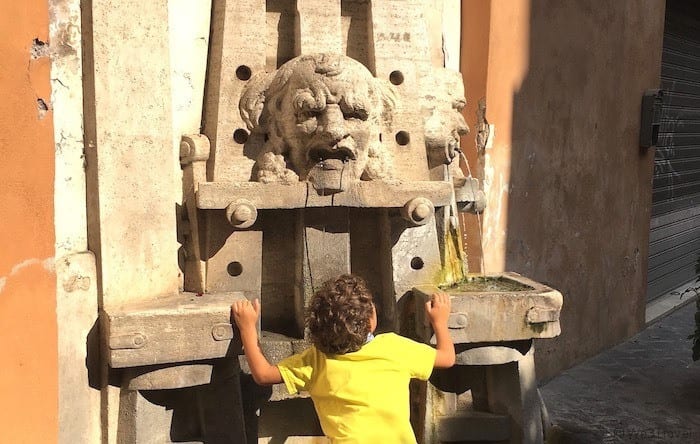 Yes, the Romans drink from public fountains. Yes, that water is drinkable. The ancient Romans had eleven aqueducts, 500 kilometers of channels giving water to the citizens for free. This is a tradition that never changed throughout the centuries and water is the only thing you can get for free in Rome; the only thing you need while visiting is an empty bottle to fill.

Furthermore, if you don’t want to look like a tourist you’d better learn how to drink! The fountains have a long spout (the famous NASO, or nose) with a main hole at the bottom where water pours out. However, if you analyze that spout carefully, you will notice that along it there lies another small hole. So, close the main hole and the water will jump out from the small one: drink that jet of water and the people around you will think that, even if you’re not a Roman, this is not your first time in Rome.

DON’T WORRY ABOUT STAYING ON THE RIGHT

The Romans and escalators: the clash of titans. Standing on one side is not a typical “Roman thing to do” so it makes it easy to recognize the tourists: they are the ones standing on one side, while the Romans…well, they are everywhere else!

I went to New York City two years ago and the most exciting thing that I did was to hail a taxi along 5th Avenue. It’s easy to understand my excitement if you know that the taxi-cabs in Rome don’t stop if you try to hail them.

If you need a taxi, you have to go to a taxi stand. So don’t be surprised if, while trying to hail a cab, the only thing you get in return is an ironic smile. 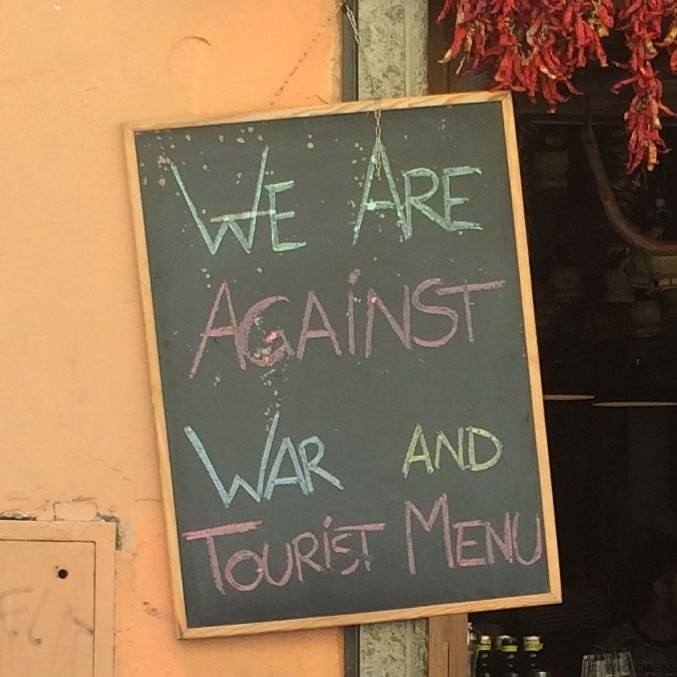 The Romans have a strange relationship with food. I’ve already told you about the traditional order of the different courses but now I want to be clearer. Just imagine a Roman going out with his friends: he will order an appetizer, then a “primo” (pasta or soup), then a “secondo” (meat or fish) with a “contorno” (salad, vegetables or potatoes) and then a dessert, coffee and “limoncello” or other liqueur… and he will eat and drink all of these!

When Romans are sharing a meal with your friends, they believe in “the more, the better.” Gulping down tons of food is the best way to tell your friends just how much you love them and the extent of which you are enjoying the night.