Jamestown gets the credit for being the first colony in Virginia, but before the colonists made it to Jamestown, they first landed at what they named Point Comfort, which is now part of Hampton, Virginia. The colonists might have been better off if they stayed there, but their charter ordered them to move inland and find an island to secure. They found what they were looking for upriver in Jamestown, which unfortunately was also swampy and lacking fresh water, contributing to the ultimate fate of the colonists.

Hampton, Virginia also holds the unfortunate honor of being the first place that captured Africans were brought to America as slaves to work the growing tobacco plantations.

The waterways of Hampton Roads, named after Henry Wriothesley, the 3rd Earl of Southampton, also played critical roles in the early defense of the nation and in the Civil War. Located at the entrance to the Chesapeake Bay, the largest estuary in the world, controlling Hampton Roads means controlling trade in this area. This is what prompted the U.S. government to build two stone forts, Fort Monroe and Fort Wool, to protect this channel. It is also what prompted the infamous “Battle of the Ironclads” between the U.S.S. Monitor and the C.S.S. Virginia (aka the U.S.S. Merrimack) during the Civil War.

Hampton earned its “sea to the stars” motto through its critical role in sending men to the moon. NACA, the predecessor to NASA, located at Langley Research Center in Hampton, was the first headquarters for the manned missions to the moon. In fact, many of the original astronauts were from Hampton and Newport News.

With all this rich history, there is so much to see and learn in Virginia’s Tidewater region. Located at the crossroads of the Atlantic Ocean, Chesapeake Bay, James River, Elizabeth River and Nansemond River, a visit to Hampton and Newport News makes a great extension to a trip to Virginia Beach, Norfolk or the Williamsburg area.

If you want to learn more about the history of this area and its impact on the entire nation, here are a few must see attractions: 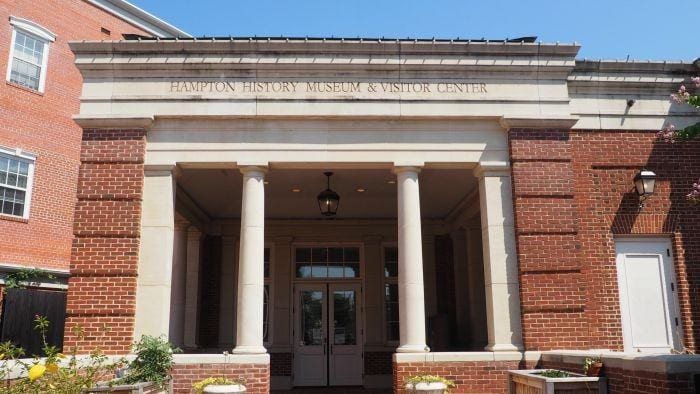 Your first stop should be the Hampton History Museum. Located right in downtown Hampton, this small but beautifully done museum does a great job of walking you through the entire history of the area. You start off with the Native American Powhatan nation, then move into the early colonists, through the Revolutionary War and into Antebellum Hampton. The exhibits utilize artifacts found in archeology digs in Hampton, recovered from families, or recreated with great care.

While the museum covers Hampton Roads’ role in the Civil War, including the important Battle of the Ironclads, you’ll actually get a much better view of that slice of history at the U.S.S. Monitor Center at the National Mariners’ Museum in Newport News. What the museum does introduce is the role General Butler played in declaring slaves seeking asylum at the Union fort as “contraband” and refusing to return them to their slave owners. This eventually led to thousands of escaped slaves living at Fort Monroe. In the space of an hour or so, you can walk through four hundred years of Hampton history, including its pirate history (the head of Blackbeard was placed on a stake at the river entrance as a warning), the post-war era of grand hotels, the rising crab and oyster industry, and the all-important role in putting a man on the moon.

The Hampton History Museum is located at 120 Old Hampton Lane in Hampton, VA. Open Monday through Saturday from 10 am to 5pm and Sundays 1 to 5pm. Admission is $5.00 for adults and $4.00 for children ages 4 through 12.

Fort Wool is located on a manmade island at the mouth of Hampton Roads, and therefore only accessible via boat. To get there, take a three hour tour on board the Miss Hampton II bay cruise. You will also pass by Fort Monroe and get an up close look at the Norfolk Naval Yard. The tour includes a 30-minute stop at Fort Wool, where energetic Park Rangers fill you in on the unique history of the island and fort, including the manufacture of the island itself. Not always called Fort Wool, its original name was Fort Calhoun, for President Jackson’s Secretary of War, John C. Calhoun. However, once South Carolina seceded from the Union and Calhoun returned home, the fort was renamed after Major General John Ellis Wool, a Mexican War hero and commander at Fort Monroe. 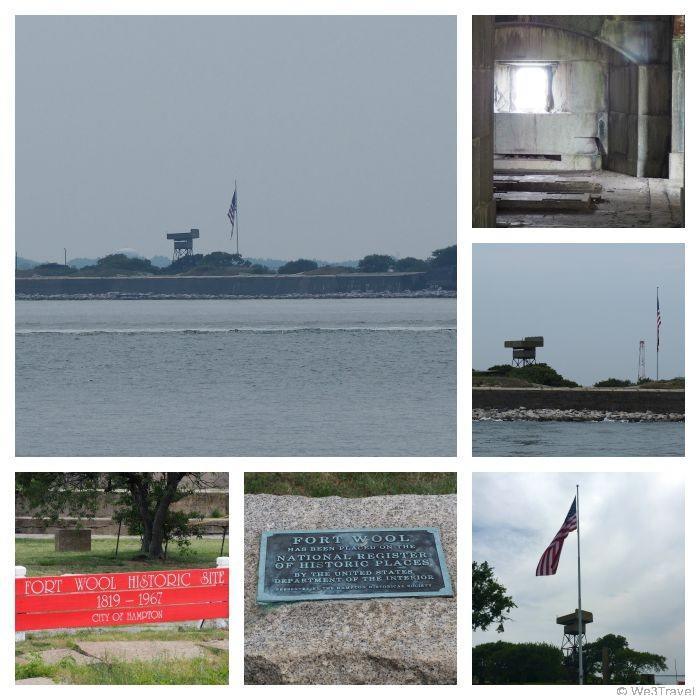 Fort Wool was originally built as a companion fort to Fort Monroe, to provide crossfire. However, it provided very little utility during the Civil War, as its batteries were facing the wrong way to protect against the Confederates coming up the river.

Despite its location in Virginia, Fort Wool and Fort Monroe always remained in Union control. Once a favorite escape for President Jackson, not much of significance remains today but the tour about its colorful history is worth the stop.

The Miss Hampton II departs from 710 Settlers’ Landing Rd. in Hampton, VA. Tickets are $26.00 per adult and $15.00 per child ages six through twelve, children under six are free. Tours depart at 11 am on Tuesday through Saturday and Sundays at 2pm. Be sure to check the website for the latest information.

The Casement Museum at Fort Monroe

Since its completion in 1834 until its decommissioning in 2011, Fort Monroe was an active military base. The largest stone fort in America, and the only one to be surrounded by a moat, Fort Monroe has played an important role in American history. It was the place that freed blacks and slaves came to seek asylum and commanding officer General Butler declared them “contraband” and refused to return them to their owners. It was a place where a Robert E. Lee and even a young Edgar Allen Poe served for a time. Perhaps most famously, Confederate President Jefferson Davis was even imprisoned here for two years after the Civil War.

Today its history is preserved in the Casemate Museum at Fort Monroe. When we visited, I was perplexed because I wasn’t familiar with the term casemate. Basically within the stone walls of the fort are casements, or small stone rooms which once housed the cannons that protected the fort and the channel it was guarding.

These casemates served as living and social quarters for the soldiers and officers stationed here. Today quite a few of the casements have been converted into a museum that tells the history of the fort through exhibits and dioramas. The museum began as a place to preserve the cell where Jefferson Davis was held. Today you can see the cot and the handcuffs used to keep him there. While the cell was very barren, it is decorated by a large American flag hanging right across from the cot, used to taunt Davis.

For a fort that most people have never even heard of, it has played a crucial role in our country’s history and is worth a visit when you are in the area. In addition to the museum, you can walk along the walls of the Fort, visit the soldiers’ pet cemetery, take a stroll along the water’s edge with views of Old Point Comfort Lighthouse, or visit one of the area’s beaches.

The Casement Museum at Fort Monroe is located at 20 Bernard Rd in Fort Monroe, VA. The museum is open Monday through Sunday from 10:30 am through 4:30 pm from Memorial Day to Labor Day and Tuesday through Sunday for the rest of the year. Admission is free for a self-guided tour. Please check the website for current information.

The U.S.S. Monitor Center at the National Mariners’ Museum 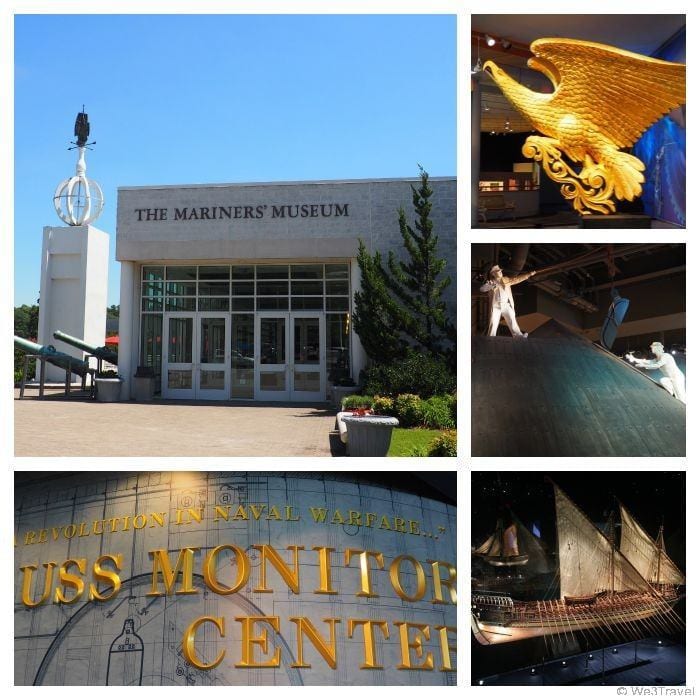 The National Mariners’ Museum hosts an interesting collection of maritime history, including a stunning collection of miniature ships, all handcrafted by the same artisan. But the real crown jewel is the new U.S.S. Monitor Center. Opened in 2007, the 63,500-square-foot U.S.S. Monitor Center houses the original turret from the Union Ironclad ship, the U.S.S. Monitor. While the turret is still encased in chemicals as part of its preservation since being raised from the ocean floor in 2002, a reproduction and many original artifacts from the ship are on display.

The Center does an excellent job of telling the story of the two Ironclads, the U.S.S. Monitor versus the C.S.S. Virginia, which was once the Union ship Merrimack, but was damaged and then raised by the Confederates and transformed into the Ironclad Virginia. Visitors can watch a video about how the Monitor sunk in a storm off the coast of Cape Hatteras, enter a replica of the CSS Virginia as she is being built for battle, learn about the building of the U.S.S. Monitor, and visit the living quarters of sailors in a full-scale reproduction of the Monitor. What really impressed me was the excellent presentation in the Battle Theater that gave a blow-by-blow visual description of the Battle of the Ironclads at Hampton Roads.

The Center also offers special “hands on with history” programs that give visitors the opportunity to actually handle some of the artifacts from the Monitor. We had a chance to hold silverware that had been rescued from the ocean floor, a sconce from the Monitor, and a handle that was used to signal the direction to turn the turret.

We really enjoyed our time at the U.S.S. Monitor Center and highly recommend a visit!

The National Mariners’ Museum is located at 100 Museum Drive in Newport News, VA. The museum is open daily from 9 am to 5 pm in the summer. Admission is $13.95 for adults and $8.95 for children ages 4 through 12. Information about special programs can be found on its website.

Hampton and Newport News make great stops when visiting nearby Virginia Beach, Norfolk or Williamsburg and I encourage you to expand your itinerary to include stops in these cities. In addition to the many history sites, families will also enjoy exploring the Hampton waterfront and the historic Hampton Carousel, visiting the NASA Virginia Air and Space Museum, and learning about Virginian wildlife at the Virginia Living Museum. When staying in the area, the Newport News Courtyard by Marriott and Hampton Hilton Garden Inn both offer good options for families.

After spending a few days in Newport News and Hampton, VA, our minds were overflowing with history, but we wanted more. So we continued on our Virginia roadtrip to soak up more history at Jamestown and Williamsburg. 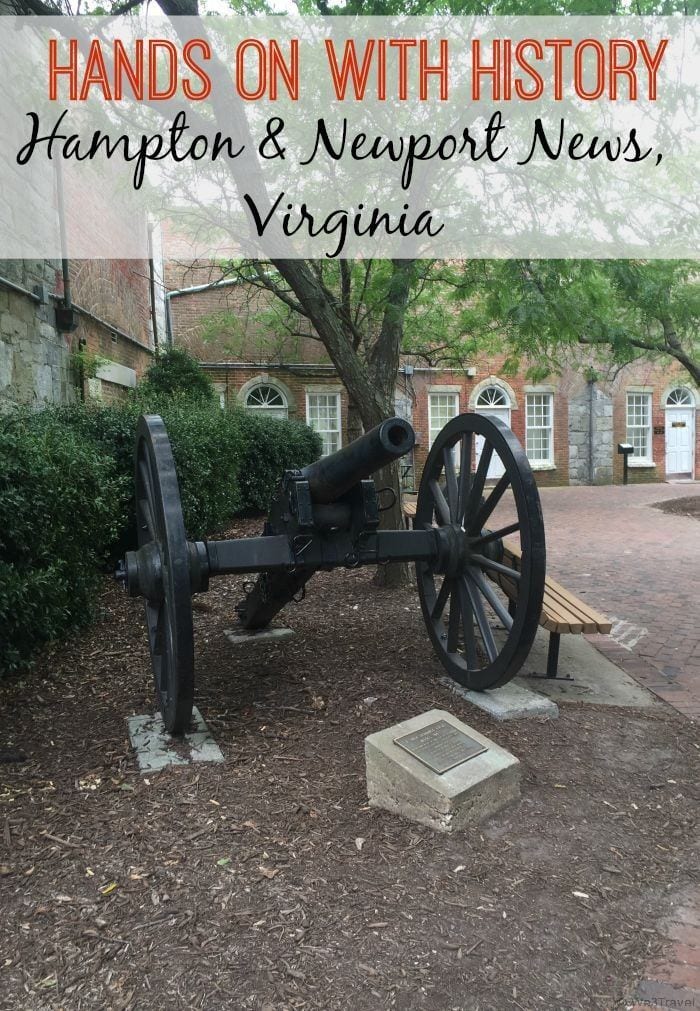 Note: Our visit to Newport News and Hampton, Virginia was hosted by Visit Newport News and Visit Hampton. We were given free admission to these attractions to facilitate this review. All opinions are our own.