If you are looking for a day trip from Madrid, taking the train to Toledo is a popular alternative.  While I’d still rank Segovia above Toledo, there are some very interesting sites in Toledo, which is a UNESCO World Heritage site.  It is a short 30 minute AVE high speed train ride from Madrid‘s Atocha station to the train station just outside Toledo.  Whether by bus or cab, your approach to Toledo will provide a great view of the walled city and the Alcazar towering over the town.

Our first stop upon arrival was the Alcazar.  The old Alcazar has been turned into an army museum.  Since Toledo is also famous for its sword making, it seems appropriate to have an army museum, which showcases weapons and armor through the centuries.  While fascinating for the war or weapons buff, even little sword fighters will get bored after a while so you may only end up spending one to two hours here.  But be sure to line up early before the crowds gather.  My disappointment was that the way the museum was set up, you could see very little of the original architecture of the building.

From the Alcazar, it was a short walk over to the cathedral.  The cathedral, which is claimed as one of Spain’s finest, was built between 1227 and 1493.  After going across the street to purchase tickets and an audio guide, we stepped into what I felt was the darkest of the Gothic cathedrals we saw that trip.  The second largest in Spain after Seville, it is enormous and the architecture is awe-inspiring, but the atmosphere is downright fear-inspiring.  One site to note inside the cathedral is the treasury, located below the tower and containing a jaw-dropping display of gold and silver masterpieces.  In another room you will find paintings from many Spanish masters including Goya and El Greco.

It is definitely easy to get lost in Toledo, with so many winding streets and alleyways. Luckily, the city itself isn’t that big so if you hit a wall (literally), just turn around and go back the other way.  After wandering a bit in the heat, we found a small cafe for some lunch.  By the time we finished, almost everything was closed for siesta and we were left hot and sweaty in the broiling heat.

Luckily, we stumbled upon a damascene artisan hard at work and he gladly let us into his shop to browse. Damascene is the art of decorating non-precious metals with gold threads.  While it has its roots in the Middle Ages, the capital for damascene jewelry is in Toledo. Since we hadn’t purchased many souvenirs and I especially like hand-crafted items, I was intrigued.  This encounter with the gentleman artisan was one of the most special experiences of our entire trip.  While he didn’t speak much English, between his English and our Spanish we were able to get by.  I picked out a beautiful necklace of silver against turquoise, and we searched for something small for my daughter.  The shop owner was so taken with our daughter that he wrapped up a beautiful pair of earrings for her as a gift.  When his daughter came to oversee the transaction, he felt guilty about quoting us the wrong price and also snuck a necklace for our daughter behind his daughter’s back.  I felt guilty taking it but he gave with such joy it was so touching.  If you are in Toledo, I strongly recommend visiting the Artesania at Taller del Moro, 7!

After shopping for a while, siesta was over and we headed down to the old Jewish Quarter to visit the Museo del Greco.  This is the best single artist museum I have ever been to.  It claims to be based in the house in which El Greco was born.  Although this is disputed, it is at least similar to a house in style and location where he was born and provides great insight not just into his work but into what a 15th century dwelling would look like.  The most fascinating exhibit however is a multimedia presentation where really explain his technique and teach you to look at his work with new appreciation.  Even the youngest budding artists will enjoy this presentation.

We then (finally) got to see some real evidence of the Jewish history in Spain with a visit to the Singoga del Transito and the Sephardic Museum.  The synagogue was interesting, with the Sephardic influences shown heavily in the arches and the women’s gallery.  Outside the museum was a nice courtyard to stop and relax for a while on a hot today.  Altogether, the visit only took about 30 minutes.

We thought we a lot of time to kill and we took a long, hot walk through town before getting some ice cream and checking out the shops for Toledo’s famous swords and marzipan (and plenty of figures of Don Quixote.) As it turns out, I misread the 24 hour clock and we missed our train and the next one was booked. Luckily we were able to get tickets on the next bus, which was a lot cheaper than the AVE train (thankfully since we had already lost the value of our train tickets) and not that much longer so it really is a good budget alternative for visiting Toledo.

While Toledo wasn’t my favorite city in Spain, the El Greco Museum and our stop at the damascene shop were truly trip highlights. 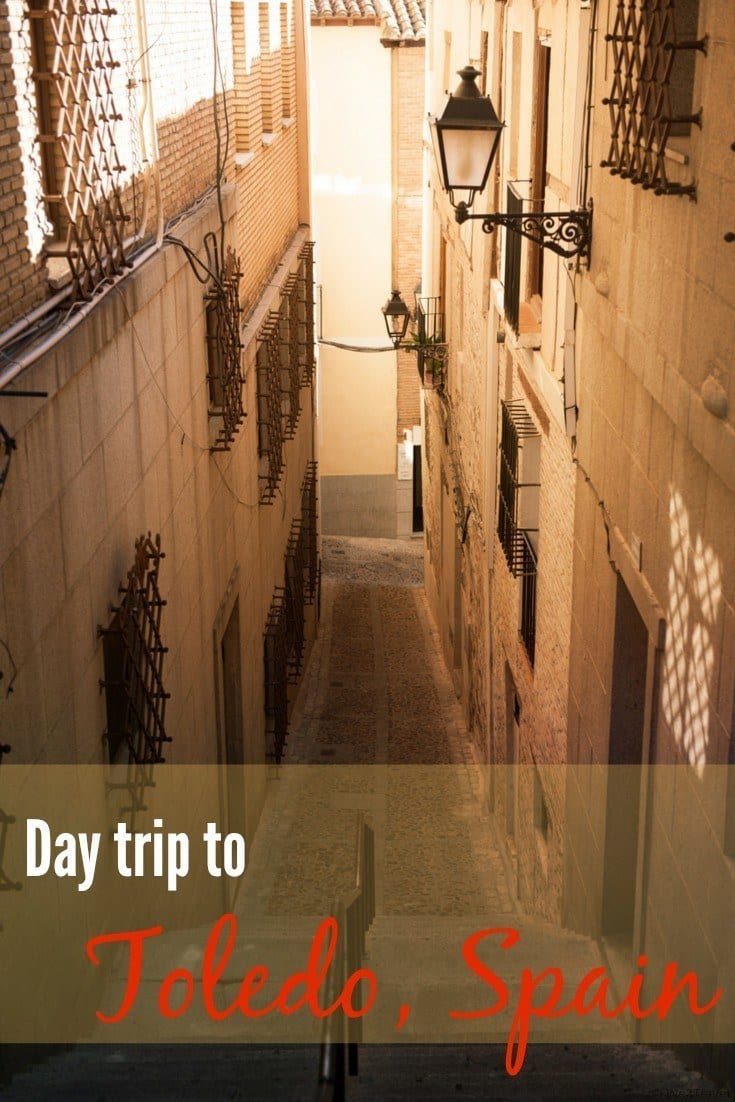 Have you ever been to Toledo? Anything you would recommend?

9 thoughts on “A Day Trip to Toledo, Spain”