When you think about theme park food, you think hot dogs, hamburgers, ice cream and various fried and sweet treats. Granted, some theme parks have jumped onto the healthy food wagon recently. Quite literally at Universal Orlando where you can find fruits and veggies on wagon carts throughout Harry Potter’s Wizarding World. But dining…at a theme park? Not a term you would usually associate with amusement parks, but dining at Universal Orlando can be a treat, especially if you step outside the park to eat at Universal CityWalk.

As you may have picked up on with previous posts, food is an important part of our vacation experience. We try to find local favorites when we can, but sometimes convenience is key. During our trip to Universal Orlando last year, we stayed at Universal’s Cabana Bay Resort to maximize our time in the park so we really didn’t want to waste time heading into downtown Orlando for dinner. Since we were all about the Harry Potter experience, a meal at either the Three Broomsticks or Leaky Cauldron was a must. But we wanted to have one “special” meal during the trip and luckily CityWalk at Universal Orlando has plenty of options. From quick service to fine dining, CityWalk has over a dozen options including Jimmy Buffett’s Margaritaville, Hard Rock Cafe, Bubba Gump Shrimp, Antojitos Authentic Mexican Food and more.

Emeril’s Restaurant Orlando — For our “special” meal, we picked Emeril’s Orlando. After all, Emeril was the guy that got Glenn into cooking. We’ve both tried his restaurants before in New Orleans,  Las Vegas and Florida, but this was Hannah’s first taste of Creole-based cuisine. The restaurant itself was beautiful, and large enough to accommodate quite a crowd but reservations are still highly recommended (and easy to make using OpenTable.) For the location, the service was surprisingly formal and excessively attentive. Another lesson learned, bring a sweater because it is also highly air conditioned.

Since we were in the mood to splurge, we dove right in with the smoked wild and exotic mushrooms over pasta with tasso ham, crawfish and andouille bread, and the braised pork belly. Of the appetizers, the mushroom pasta was certainly the best and could easily have been Hannah’s whole meal. 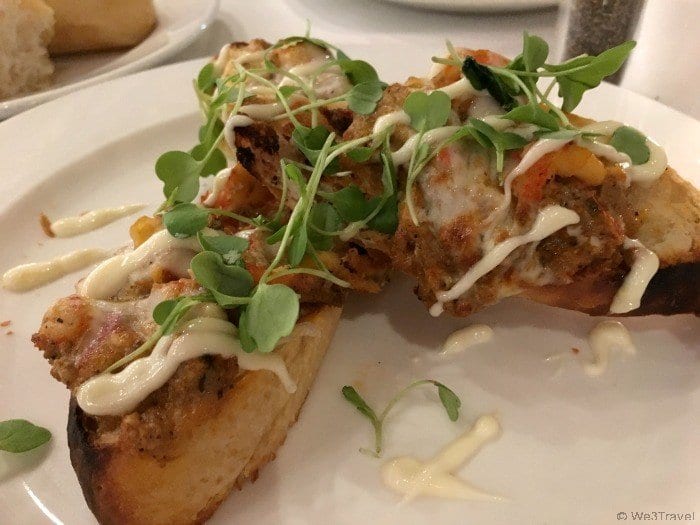 The courses came out in rapid succession, which was good since we wanted to get an early morning start. Each table is served formally, with multiple servers arriving at the table in unison and brandishing our plates for a synchronized reveal. It was nice but I remember feeling a little oft put by how frequently our solicitous server checked on us, constantly interrupting the conversation.

For our main courses, we selected the shrimp and grits, andouille crusted drum, and the BBQ roasted salmon. The shrimp and grits were good, but I admit to having better in Alabama at GinnyLane and Fisher’s Orange Beach. The drum and the salmon were likewise good but not stand out dishes, with the andouille on the drum not having a very strong flavor.

The dish of the night may have just been Emeril’s famous banana cream pie. It was the perfect ending for our splurge! And splurge it was as Emeril’s + theme park = expensive! I think what I have reinforced to myself though is to only go to celebrity chef restaurants in their original locations or at least not in big tourist attractions like Vegas or Orlando. The food is good but it doesn’t quite live up to expectations and the service is never the same as a different atmosphere with more professional servers.

The CowFish at CityWalk — When the PR rep at Universal Orlando first suggested that we try CowFish I had never heard of it before but burgers and sushi intrigued me. After all, sushi is Hannah’s favorite food and I can always go for a burger. It is hard to miss Cowfish as you are entering CityWalk and its multi-story restaurant is often jam-packed. The decor is sort of retro-Asian-aquarium — fun with plenty to look at for kids.

Everything on the menu sounds enticing so it is tough to choose. After a long day at the parks, first on the agenda was a fun drink and their Hokkaido Nights cocktail hit the spot with nectarine vodka, lemongrass syrup, fresh basil, mint and cucumber. We then sampled an array of appetizers including the crab rangoon dip, edamame, and bacon truffle fries — please, I can’t resist truffle fries but then you throw bacon on it? They didn’t quite deliver the truffle flavor I was looking for but fries are my thing, truffle fries all the more so.

For dinner, we felt like we should try some of the more unique specialties at The Cowfish, so we steered away from the standard sushi and burgers for the more creative offerings. Glenn and Hannah tried the Firecracker Sushi Roll, with shrimp tempura topped with yellowtail. Glenn also tried The High Class Hillbilly Southern Style B-B-Q-shi. Sound like a mouthful? It definitely was. It features pulled pork, caramelized onion and BBQ sauce,  potato wrapped and house-fried. I went for a different “pick up,” which is a cross between sushi and a sandwich. Mine featured pesto and tomatoes, sort of like caprese salad sushi. It didn’t quite work though as slices of tomato are hard to eat in that fashion and everything kept falling apart. We all agreed that Hannah was probably smart to stick with the more traditional sushi and I should have just gone with a burger.

The biggest hit of the night was surely Hannah’s Gimme S’more Shake — with vanilla ice cream, double dark chocolate, mallow cream and crunchy graham crackers. It arrived at the table nicely toasted on top. The service at The Cowfish was also top-notch. Our waitress was very attentive, but not interruptive. She was very knowledgeable about the menu, full of energy and was great at talking us into trying new things. The Cowfish is not really as pricey as I expected (around $15 for a hamburger), given its location. I’d much rather pay a premium at a creative and fun place like this than just another chain restaurant.

Any place with the words Chocolate Emporium in the name is bound to be a hit in my family but we fell in love with the Toothsome Chocolate Emporium and Savory Feast Kitchen for more than just its decadent milkshakes and delicious desserts. The whole steampunk vibe of the place is very unique and cool. The inside of the menu tells the “backstory” and the “owner” will even come around to greet you — truly a perfect fit in the theme park world. 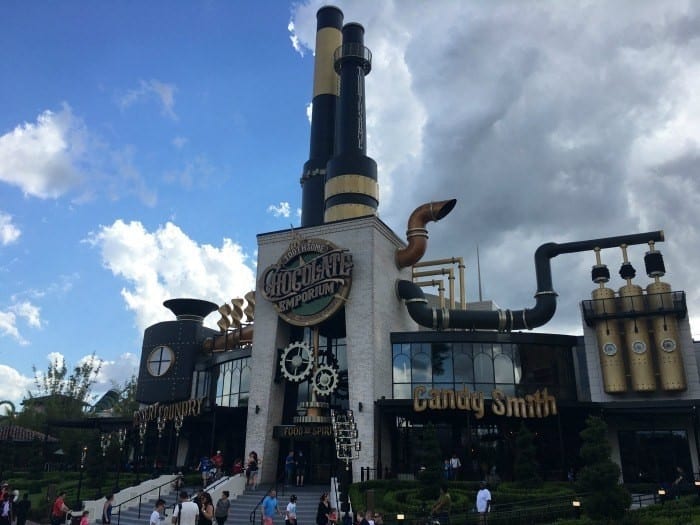 But it isn’t just the funky decor and slightly abrasive music that caught our attention, nor just the desserts, as the food itself is worth the stop for lunch or a casual dinner. My appetizer portion of the totchos (tater tot nachos) was enough for a meal and I could barely make a dent in my chocolate bread pudding for dessert. Reservations are not possible so go early to avoid a long wait. You can also stop at the chocolate counter or the milkshake window if you are just looking for a sweet treat. 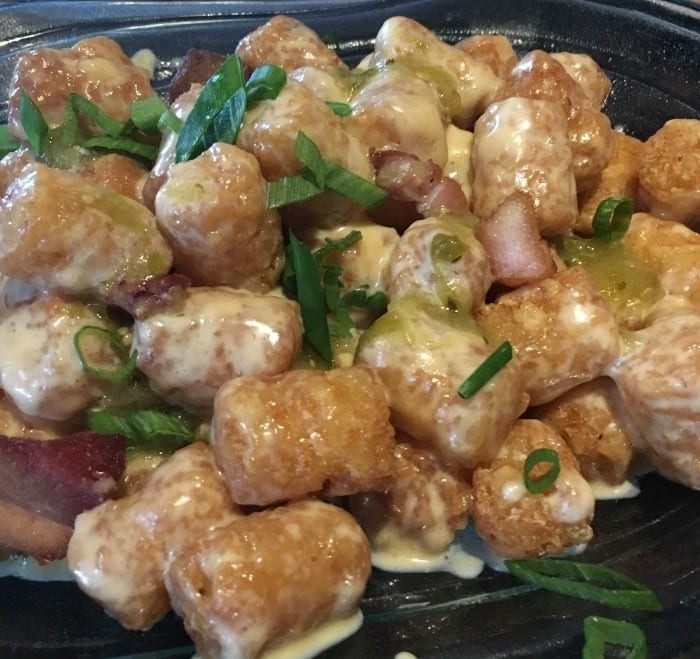 Where have you eaten at Universal Orlando and would you recommend it? 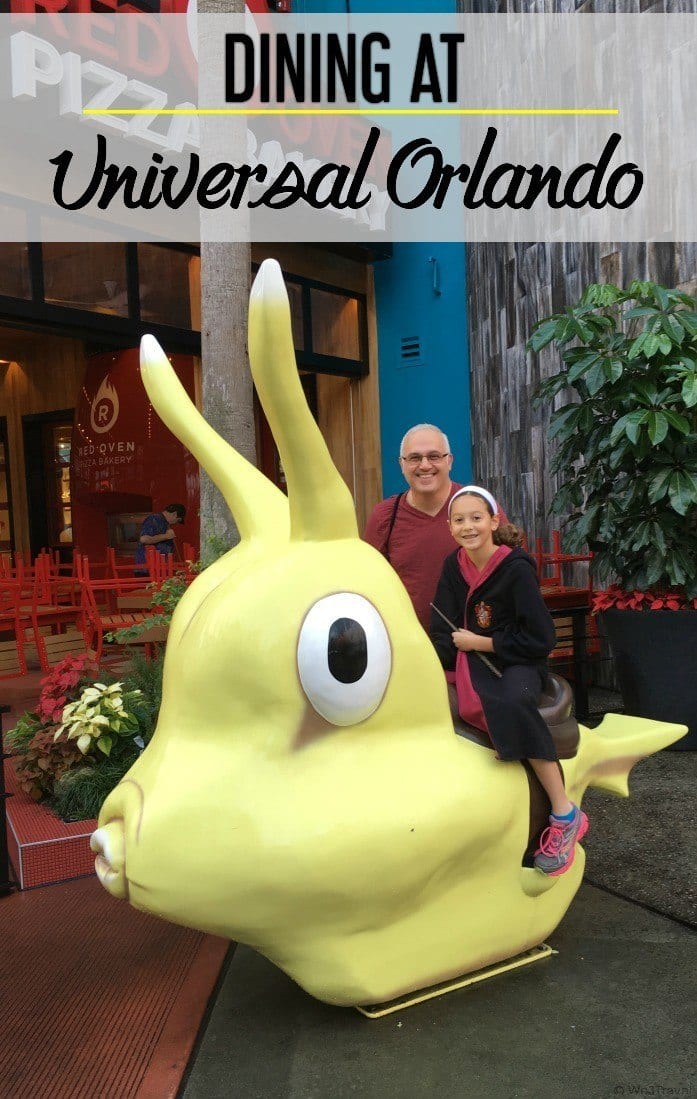 Note: Our meal at The Cowfish was hosted by Universal Orlando Resorts. All opinions are our own.