Most of the walking around Capri is past the beautiful wares of the designer boutiques from the likes of Versace, Dolce & Gabbana, Prada and Louis Vuitton. But on our most recent trip to Capri, Italy, we found a much prettier walk. One far away from the luxury hotels and well-heeled travelers to a part of the island where we barely passed another soul.

It felt like such a hidden gem that it has taken me a year to actually share the details of what I think is one of the prettiest hikes in the world. If you are spending one day in Capri, I would encourage you to squeeze this in.

There are two directions to take this loop, but unless you like climbing UP hundreds of stairs, I’d recommend you follow it in the same direction we did, starting out at the Natural Arch.

Starting off from our hotel at Casa Morgano we headed to the piazzetta, and took Via le Botteghe to Via Croce, following signs for Arco Naturale. From Via Croce you will walk through a quiet residential area and stay right onto Via Matermania. From there it is easy to follow the signs and the path past a small restaurant and up some stairs to the Natural Arch.

The views here are just spectacular. The overlook seems so close to the arch you feel like you can reach out and touch it. As you peer down at the aquamarine water crashing on the rocks below, you start to feel dizzy from the height. The only drawback to being so close to the arch is that you can’t fit it in to the camera frame to capture it in a way that provides the same impact as seeing it in real life. 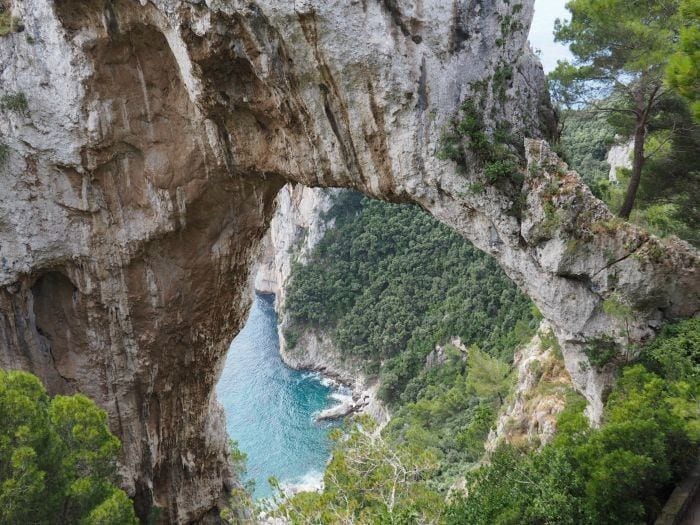 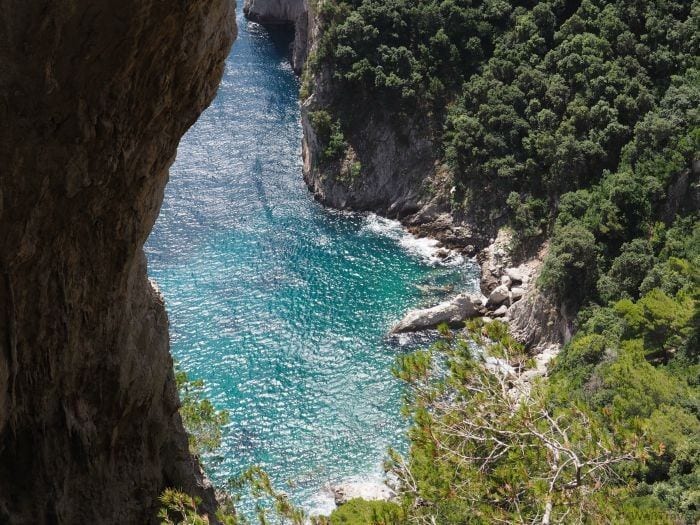 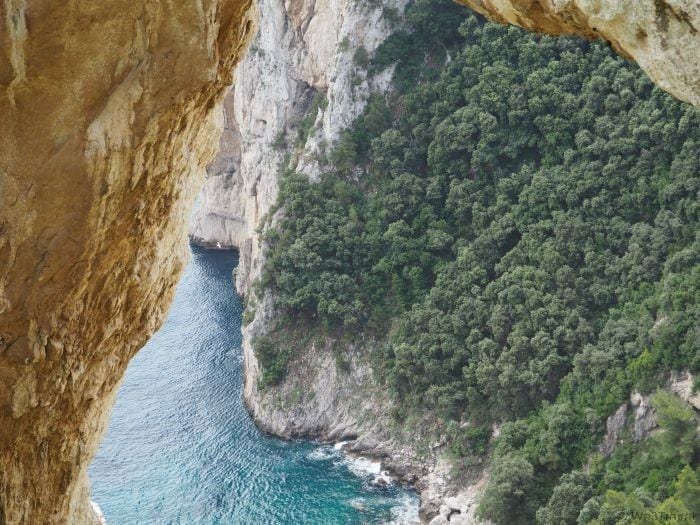 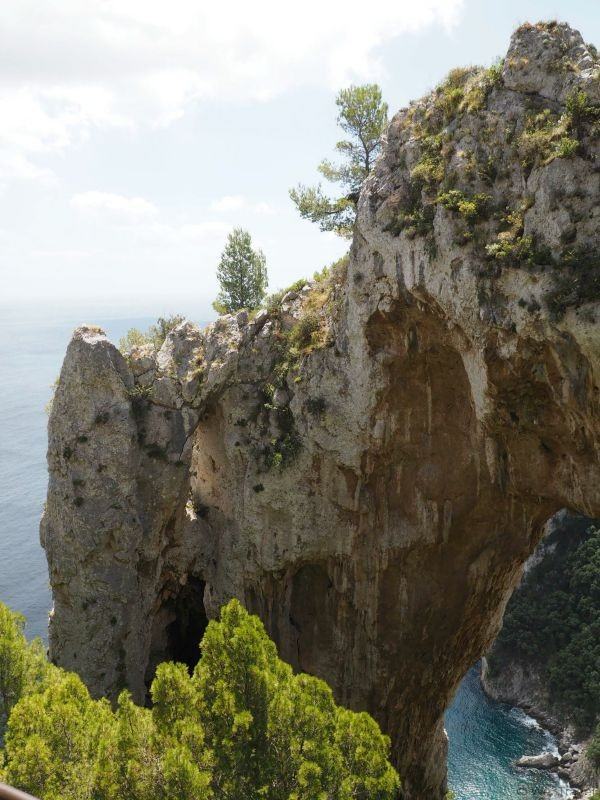 Yet somehow when we arrived at our destination, passing only one other hiker along the path, we felt as if we had stumbled upon a secret cave that surely must contain a secret treasure. The cave has clearly been used for something special once upon a day and we had fun exploring like junior archeologists inspired by Indiana Jones. 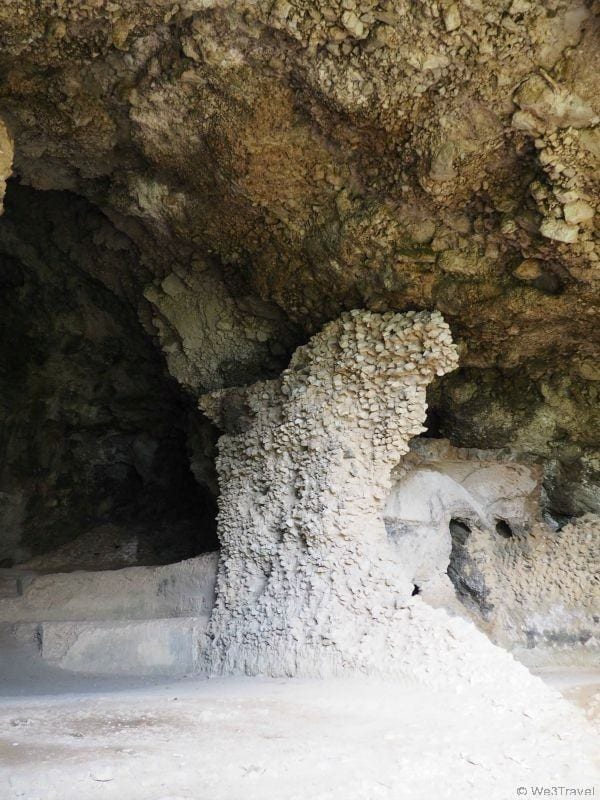 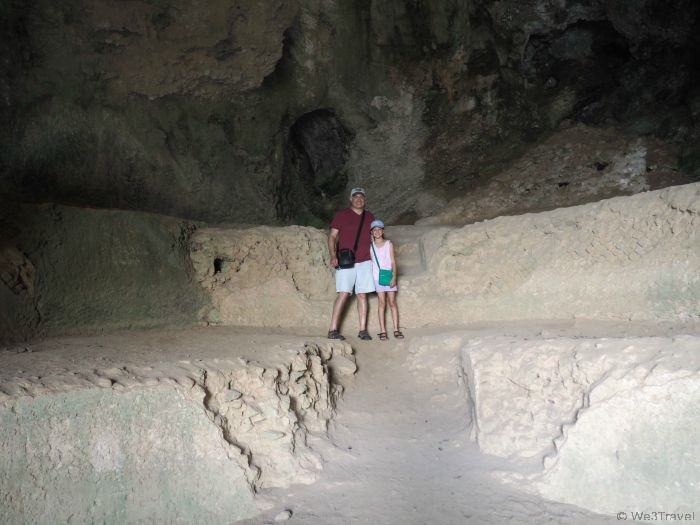 From there we continued along the Pizzolungo path, climbing slightly to take in the amazing views of the coastline and the famous Faraglioni rocks. 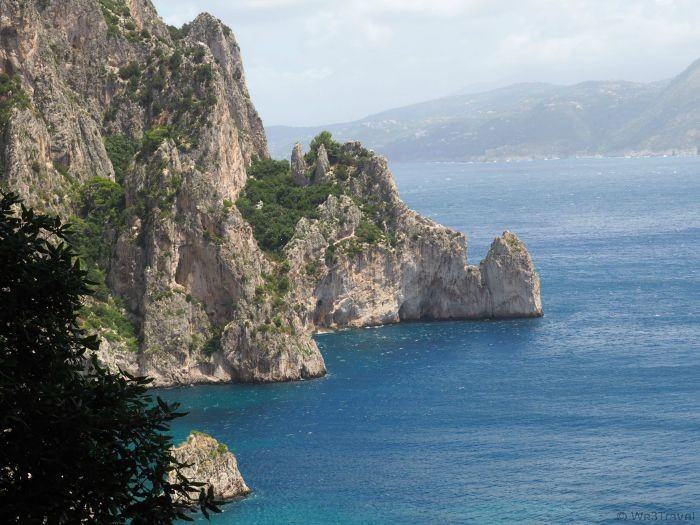 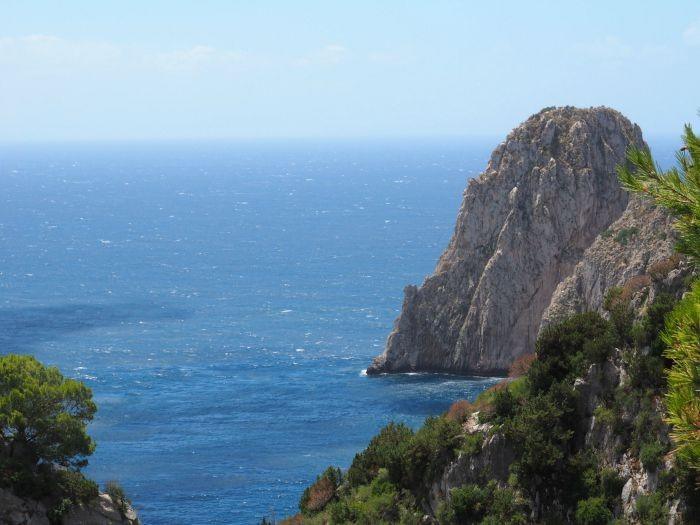 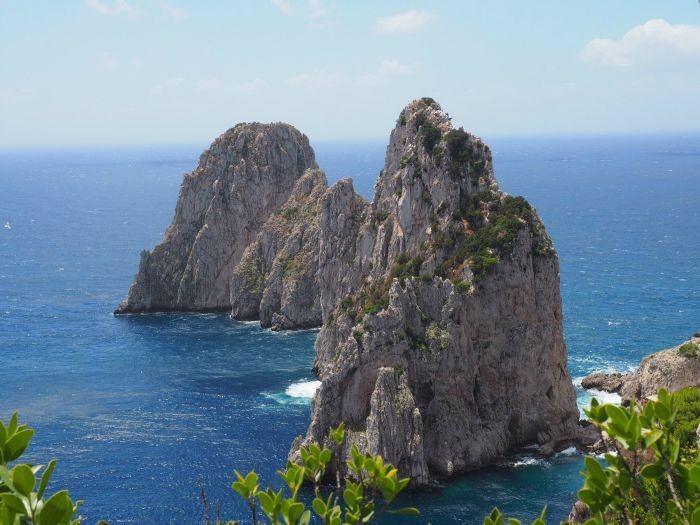 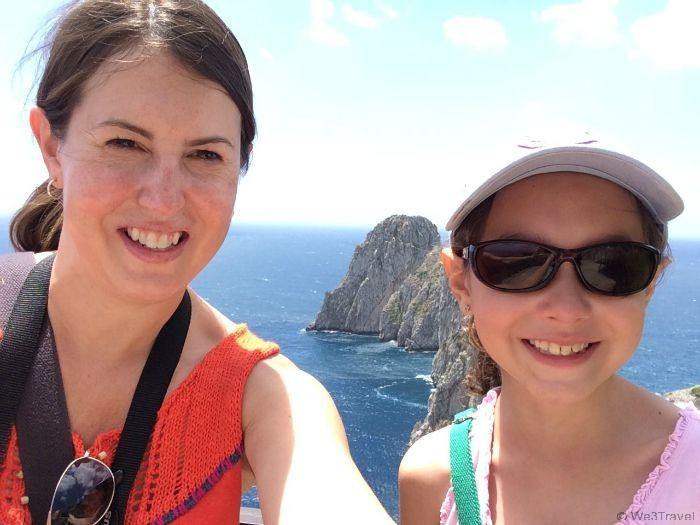 When we approached the overlook at the Farglioni rocks, the path became more crowded with people walking up from Via Tragara to see the rocks. It was also higher, with steep drop offs, sending Glenn’s fear of heights into overdrive (hence the selfie with just me and Hannah). From here, it was an easy stroll back down Via Tragara to our hotel at Casa Morgana. 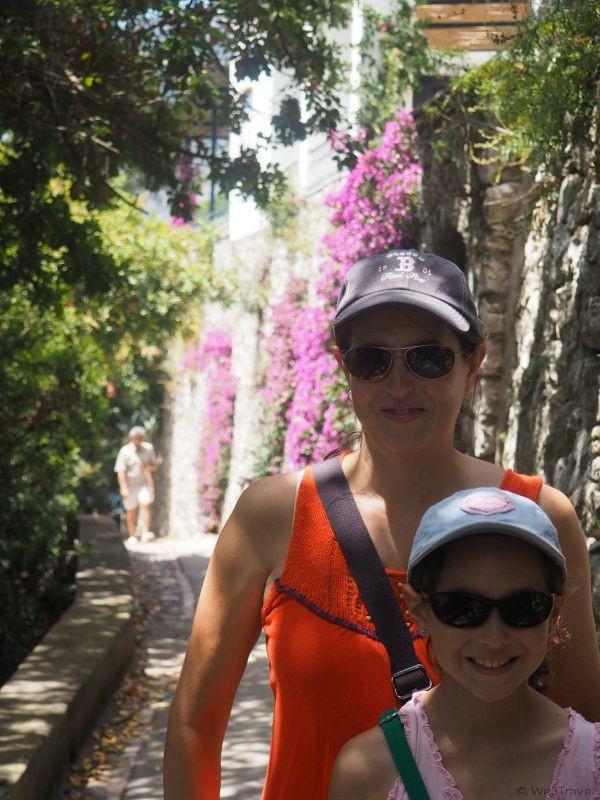 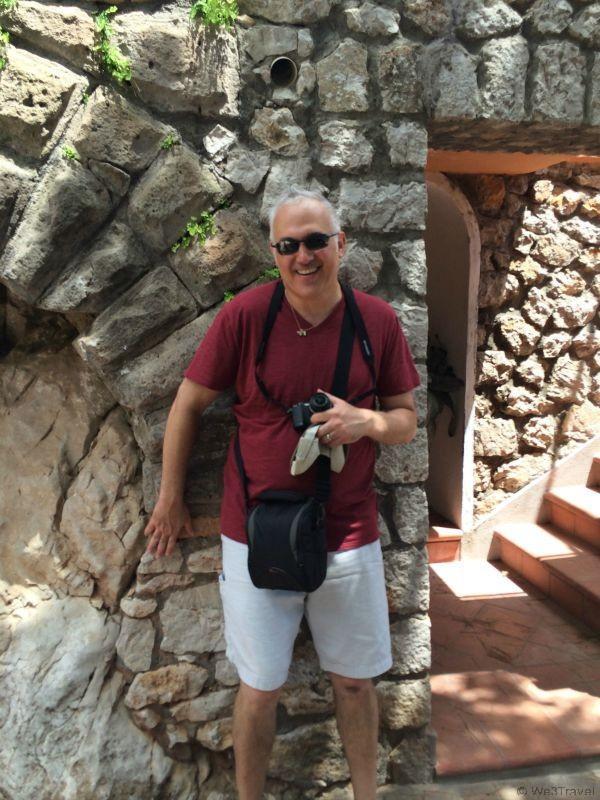 If you get a chance to visit Capri, I’d highly recommend you take this hike to the Natural Arch. If you do, head out in the morning before it gets too hot and expect it to take about two hours.

Bring along water for the walk and wear comfortable shoes for walking up and down stairs and over dirt paths. If you have more time to spend, check out my recommendations on where to eat in Capri and shop, and hiring a boat to tour Capri by water.

What do you think is the prettiest hike? 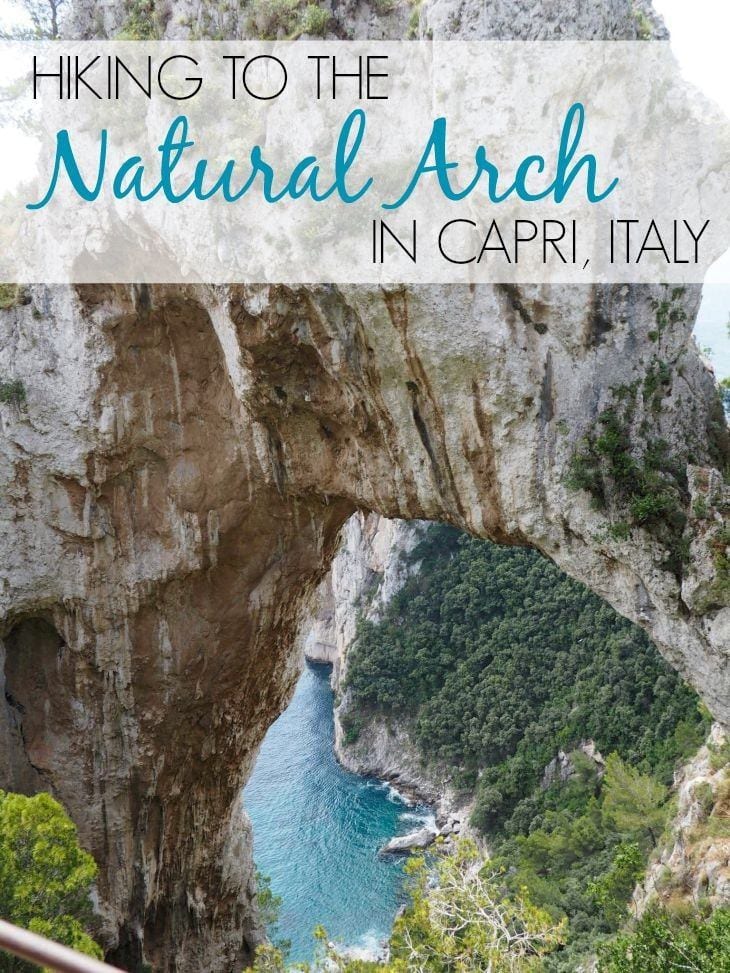 10 thoughts on “The Prettiest Hike to the Natural Arch in Capri, Italy”