One of attractions on the Boston waterfront, the Boston Tea Party Ships and Museum takes a close look at the historical event that led to the American Revolution. Boston is steeped in history, but only the Boston Tea Party Museum offers an immersive experience that lays out the events that led up to the Battle of Lexington, the first battle of the Revolutionary War.

Not every history museum is kid-friendly, but this one was truly designed with kids in mind. Visiting the Boston Tea Party Ships and Museum with kids gets them hands on with history in a way that is relatable and fun.

See what else should be on your Massachusetts bucket list! 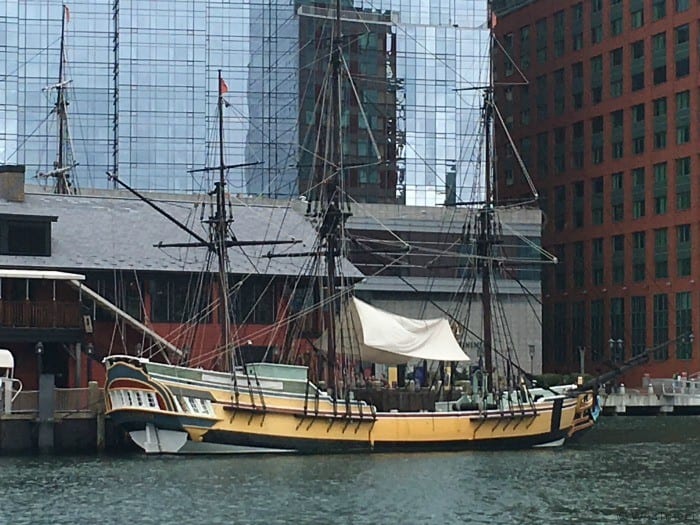 What was the Boston Tea Party?

Let’s start with the basics. The Boston Tea Party took place on December 16, 1773 when a couple hundred Colonial men (also known as Patriots — hence the name of the football team) dumped 340 chests of British East India Tea Company into the Boston Harbor. Those 92,000 pounds of tea would have been worth approximately $1.5 million today!

So why would they do such a thing? It all comes down to “taxation without representation.” In 1773, the British Parliament passed the Tea Act, which taxed the Colonies on tea. There was great resistance in the Colonies because they were being taxed by the British government but were not given their own elected representatives in Parliament.

Not everyone agreed with this stance of course and so the “Sons of Liberty,” led by Samuel Adams, conducted this “tea party” in secret, under the cover of darkness. They had tried to block the delivery of the tea and force the ship to return to England but the Lieutenant Governor had decided that the tea must be unloaded and the tax must be paid. And unloaded they were, just not in the way planned! This is the act that spurred a revolution.

Today, over that same body of water, visitors can board the Beaver, a historically-accurate replica of one of the three tall ships which were a part of the Tea Party. But the visit starts first in the Meeting House, where live actors tell the story leading up to the Tea Party events. The actors involve visitors from the very beginning, assigning them names of actual historic participants of the Boston Tea Party. In the Meeting House, “Samuel Adams” gives a speech protesting the tax on tea to rouse the rebels into action. Hannah was assigned a speaking role during the presentation, which made her a bit nervous but she did brilliantly. I thought a bonus was that you can keep these cards and feather as souvenirs. 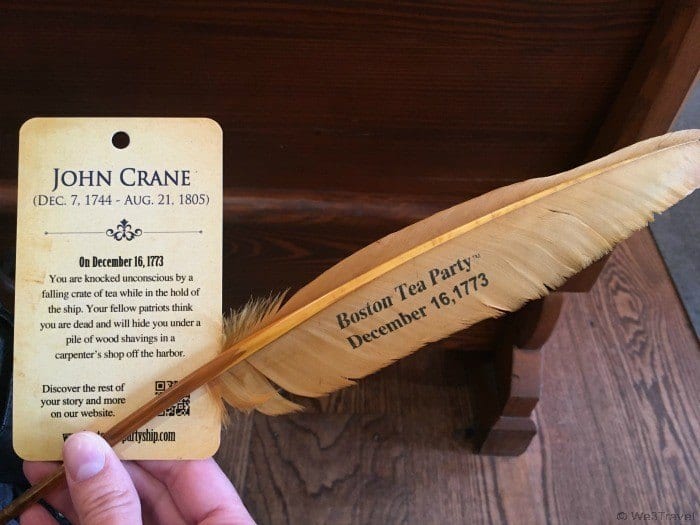 From the meeting house, the Patriots don the feathers handed out as part of their “Mohawk” disguise and march to Griffin’s Wharf to board the ship. Everyone can take turns tossing the “tea crates” into the water, which is definitely a big hit with the kids and it does a great job breaking up the history with movement. After exploring the ships to see what life was like aboard an 18th-century ship, you move into the museum section. 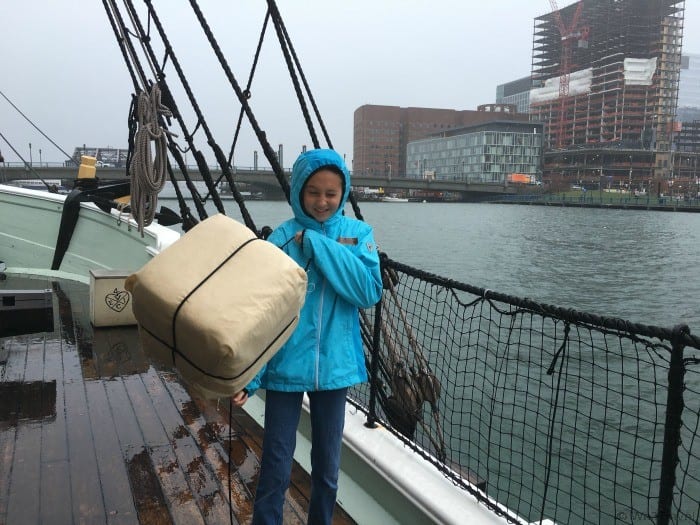 The first stop inside uses holographic images of a conversation between a Tory and a Patriot woman about the events of the previous night. Then visitors get a glimpse of one of the two remaining tea chests still in existence from the original Boston Tea Party and hear its history and how it came to rest back in Boston. This part is a bit long and hard to follow but true historians can appreciate the importance of this artifact.

If the kids tune out during that bit, they will perk back up when they see the “moving portraits” of King George III and Sam Adams debating politics using language from their actual correspondence. (Imagine the portraits in the Harry Potter movies and you will get a good idea of what this is like.)

The final stop in the museum is a short film, Let It Begin Here, that recounts the events and participants that led up to the American Revolution and the “shot heard round the world.”

The tour ends with a visit to Abigail’s Tea Room, named after the second First Lady Abigail Adams. The tea room serves drinks, pastries, salads, sandwiches, clam chowder and some kid-friendly favorites like PB&J and mac n’ cheese. They also serve five teas, some of which were the same blends thrown overboard during the Boston Tea Party. Abigail’s Tea Room also hosts “Huzzah! Tavern Nights” on the second and fourth Friday of every month, featuring period music, rustic food and historically-inspired beverages amidst a host of colonial characters.

Is the Boston Tea Party Museum Good for Kids?

Before I went, I wasn’t sure if the Boston Tea Party Museum would be good for tween or just younger kids so I enlisted the help of my nearly twelve-year old to be the judge. After our visit, I asked her a few questions to see if she really understood the history and some of the presentations we had just witnessed.  The verdict: she passed with flying colors and quickly caught on to my questioning with one of her own…”Is this like a quiz?” She actually remembered much more than I expected…okay, I admit, she remembered more than I did like the dates and names of all three ships.

When I asked her opinion on the best ages to visit the Boston Tea Party Museum she said, “under twelve if you are ‘meh’ on history and all ages if you like history.” So there you have it, from a kid’s point of view.

Planning a Visit to the Boston Tea Party Ships & Museum 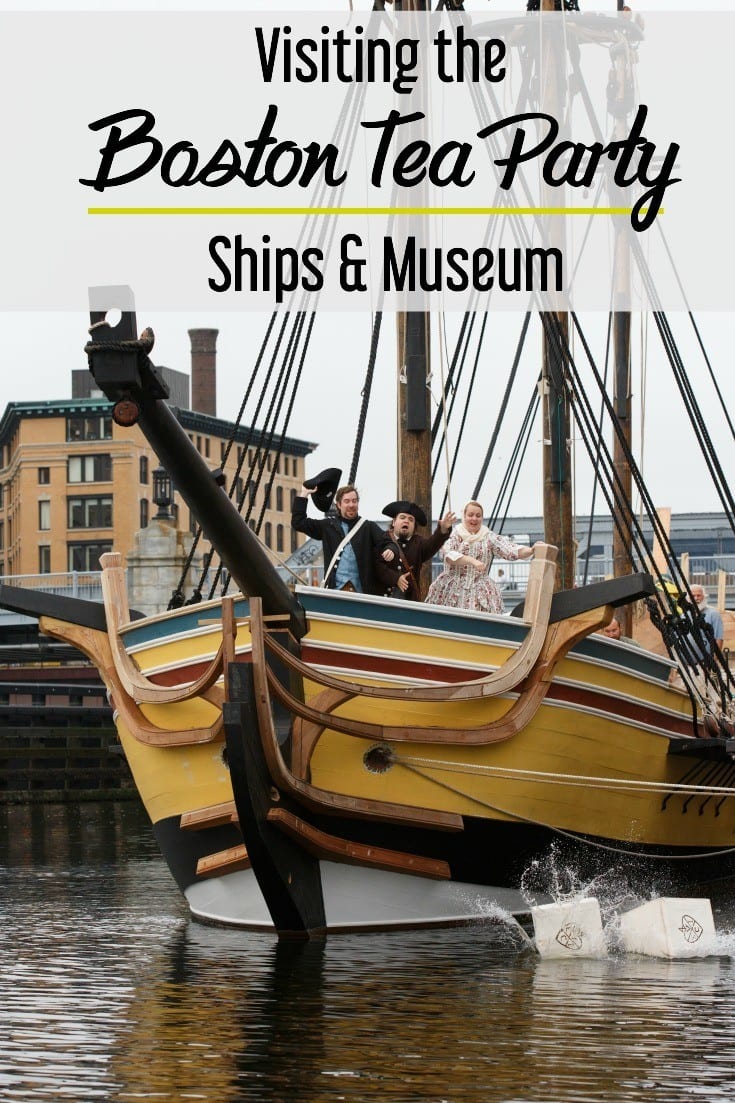 Note: Our visit was hosted by the Boston Tea Party Ships and Museum for purposes of this review. All opinions are our own.