When I was invited to visit Erie, Pennsylvania for the Mid-Atlantic Travel Public Relations Association (MATPRA) Media Marketplace, I wasn’t sure what I’d find in this lakefront town. But as is often the case when you visit somewhere new, you find a few unexpected surprises. This trip’s surprise was Presque Isle State Park. The name sounded familiar to me, but I thought it might be because there is a Presque Isle in Maine, or maybe it was from my college job doing trip planning at my local AAA office. Whatever the reason, it certainly didn’t ring a bell quite the way a park like say…Yellowstone…might. But here is the twist, Presque Isle actually gets as many visitors per year as Yellowstone National Park. Huh???

Surprised you, right? Surprised me too. I was also surprised by how BIG this park is. I know it is on a Great Lake and all, but this 3,000+ acre park has plenty to explore. The park itself is on a peninsula that juts into Lake Erie, just four miles away from the town of Erie, PA. The name itself means “almost an island” in French, because the peninsula is always shifting. It actually was an island for 30 years, but today it is a peninsula. 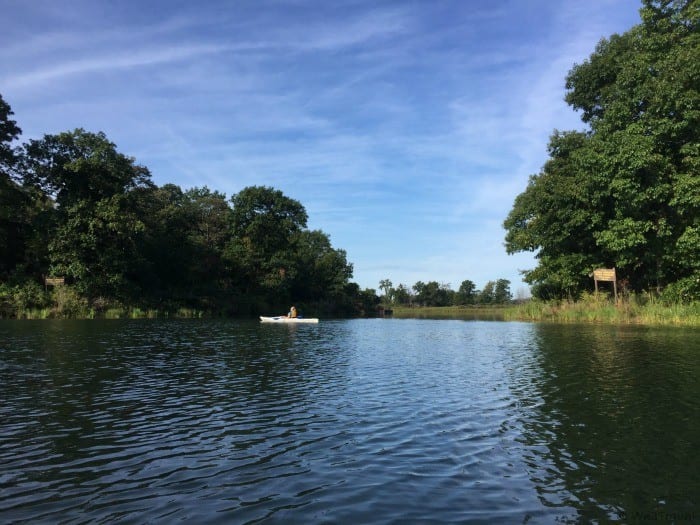 One of Pennsylvania’s 121 state parks, visitors come to Presque Isle from around the globe primarily for the birding. In fact, it has been named one of the best places in the United States for watching birds by Birder’s World magazine, particularly in the Gull Point Natural Area. The park service works to preserve this area for migrating birds on the Atlantic Flyway. The most active migration period is in March and in late November through December and shorebird migration peaks in April and in September. Altogether, over 300 different species of birds have been identified on the peninsula. Note, for those looking to visit, Gull Point Natural Area is closed to the public from April 1 through November 30 but visitors can view this area from an observation platform reached via the Gull Point Hiking Trail.

The park itself has an interesting history, serving as a base for Commodore Oliver Hazard Perry’s fleet in the War of 1812. Six of his nine vessels, including the Niagara (which you can visit at the Erie Maritime Museum), were built in Presque Isle Bay. The fleet had a narrow escape against the British during the war, as they struggled to get the vessels over the strip of land separating the bay and the lake, but luckily the British didn’t know how unprepared they were. During the winter of 1813-1814, many of the sailors stationed there suffered from smallpox and were quarantined in Misery Bay, named from the hardship suffered there. It is said that many men died and were buried in the adjacent pond, now known as Graveyard Pond. It was a little creepy to kayak over a could-be graveyard but apparently it has been dredged. Today at the tip of the park, you will find the Perry Monument, which commemorates the battle fought during the War of 1812. 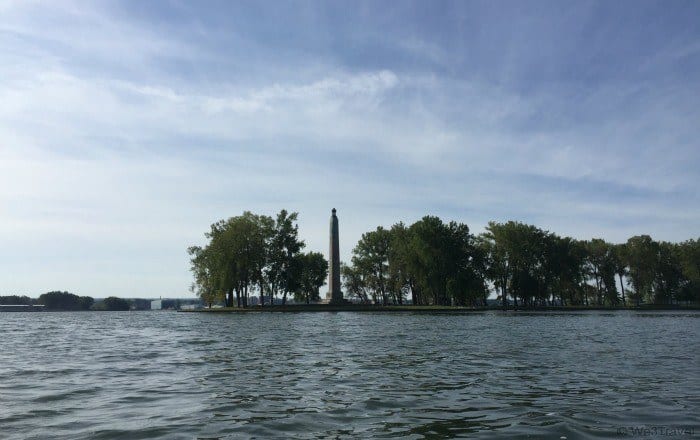 I had a chance to explore the park in two different ways — by a bus tour and a kayaking tour — but there are plenty of ways to get around the park. In addition to hiking and 13.5 miles of biking trails, you can also traverse the park on a Segway tour, a pontoon boat tour, and even a surrey (with the fringe on top.)

Our first stop was the Tom Ridge Environmental Center, named after former Pennsylvania Governor and former Secretary of Homeland Security. This beautifully-designed, environmentally-friendly center serves as a gateway to Presque Isle Park, offering free admission for visitors to learn about the different forms of life in the park. It also serves as a research center and a popular destination for visiting field trips. A highlight to our visit was a climb up to the observation tower for views of the lake. 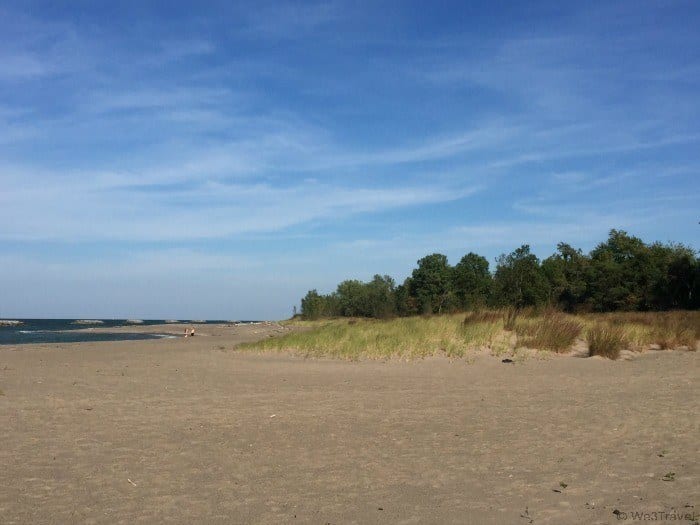 A few noteworthy stops within the park include a stop at the North Pier for a walk out to North Pier Light. You can also stop to view the Presque Isle Lighthouse from Lighthouse Beach, but it is not open to visitors. And while you may not think about Lake Erie as a day at the beach…we are just accustomed to those photos of the lake has frozen over…but if you dig your toes into the sand and watch the waves roll in, you may think you are looking out at an ocean.

Since Presque Isle State Park is a place to be active, it was fun to explore the park a bit on the water with Presque Isle Canoe and Boat Livery. Located just past the Perry Monument, they offer pontoon boats, canoes, row boats, motor boats, paddle boats, kayaks and stand up paddle boards. They supply different kayaks depending on your experience and ability, and you can either rent on your own or join a kayaking tour. 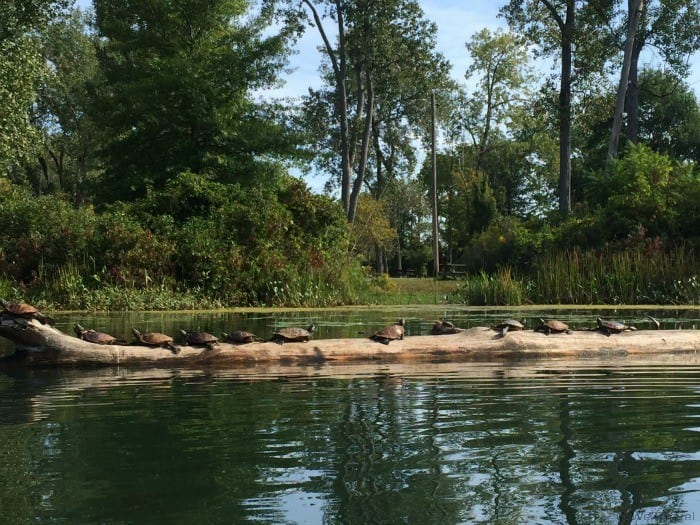 Our tour paddled through Graveyard Pond and then across the bay into a lagoon festooned by a dozen or so houseboats. The paddle across the bay had a bit of a current to it, so those less comfortable kayaking chose to hug the shoreline to take the longer way around. Along the way we were able to take in the wildlife, from turtles on a log to blue herons wading in the shallows. Since I like staying active and have been getting a lot of practice kayaking this year (in Alabama, Charlottesville, Shenandoah, and even Fort Lauderdale), this was a fun way to see the park from a different angle.

If you are a birder, Presque Isle should definitely be on your list, but even if you aren’t, make sure you add Presque Isle State Park to your itinerary if you visit the Erie area. 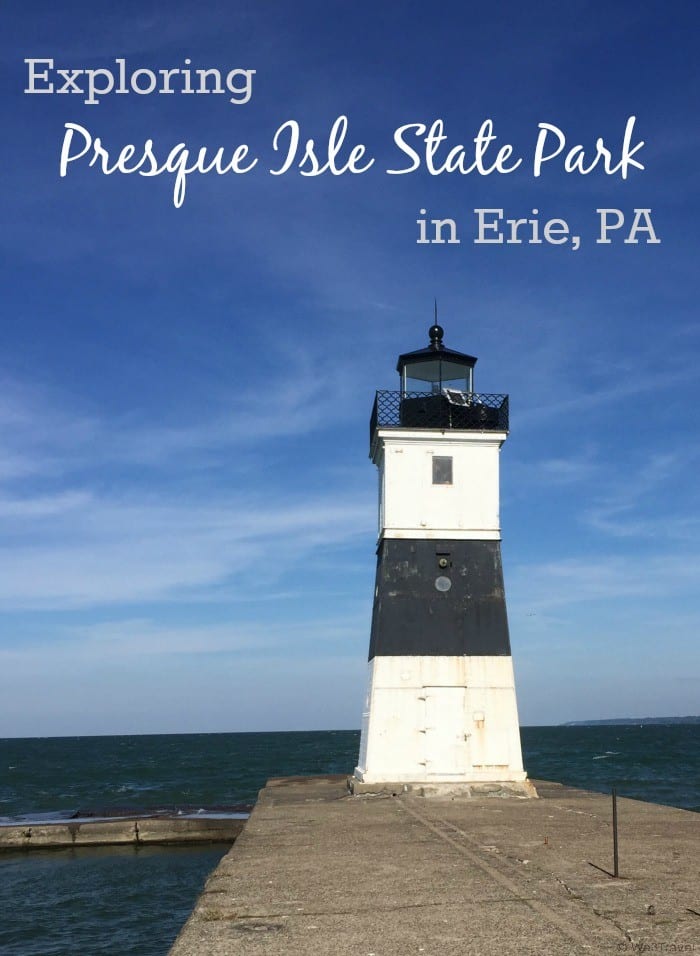 Note: My visit and tours were hosted by Visit Erie, PA. All opinions are my own.

1 thought on “Enjoying the Unexpected in Presque Isle State Park in Erie, PA”