With endless entertainment possibilities in Orlando, it is hard to pack it all in during a short trip. But when we spent four days in Orlando in June — we sure tried! We were on a mission to see all the new attractions and theme parks, from Universal Orlando Resort’s Volcano Bay to Disney Animal Kingdom’s “Pandora – The World of Avatar” and a healthy dose of Harry Potter and Star Wars in between.

Of course doing a lot also means spending a lot when it comes to theme parks. Luckily, we flew Spirit Airlines on their new route from Hartford, CT and saving on low-cost fares leaves you more of your budget to spend on the fun stuff. 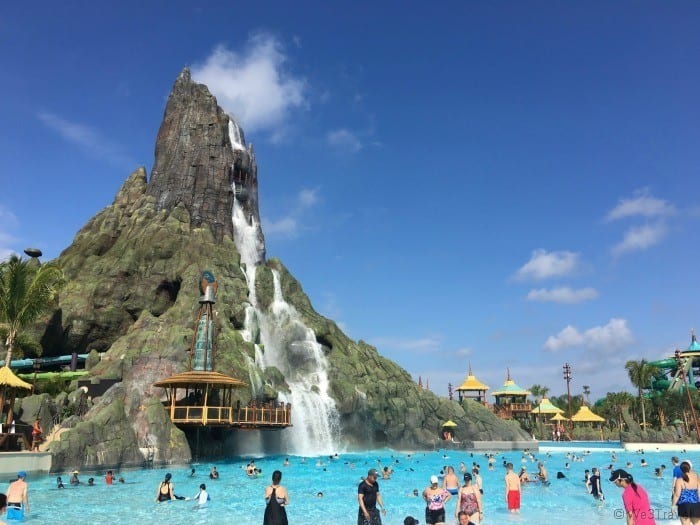 Getting to Orlando on Spirit Airlines

You hear very mixed reviews about flying Spirit Airlines, but Spirit invited me to try them out see for myself. What I learned is that you need to have the right expectations and everything is just fine. As a low-cost carrier, Spirit tries to make it very clear what is and what is not included in your fare. It is basically a “you pay for what you need and not for what you don’t” policy. So the fares are low and you pay extra for a seat assignment, checked bag, carry on bag, drinks and refreshments. 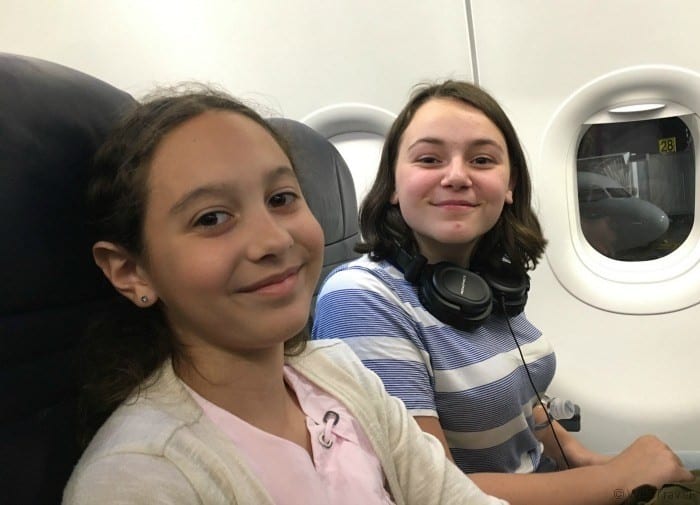 I really expected to be jammed into a seat with zero legroom, but we were in row three, just behind the “big seats” and I had a few inches between my knees and the seat in front of me. Since seats don’t recline, I was actually able to work on my laptop the entire trip without having someone leaning back and making it impossible to keep my screen upright. Our flight was just fine — honestly I’ve been on far more uncomfortable flights from non-low cost airlines. 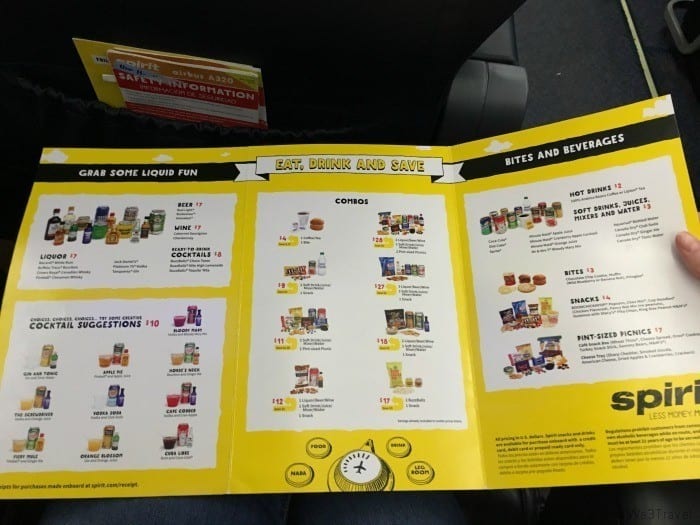 We were prepared so we brought our own snacks and refilled our water bottles before getting on board. The flight attendants have taken a note from Southwest and add a lot of humor to their announcements, including some self-deprecating humor poking fun at the “cozy” environment and need to pay for refreshments to try to keep everyone’s mood lighthearted. 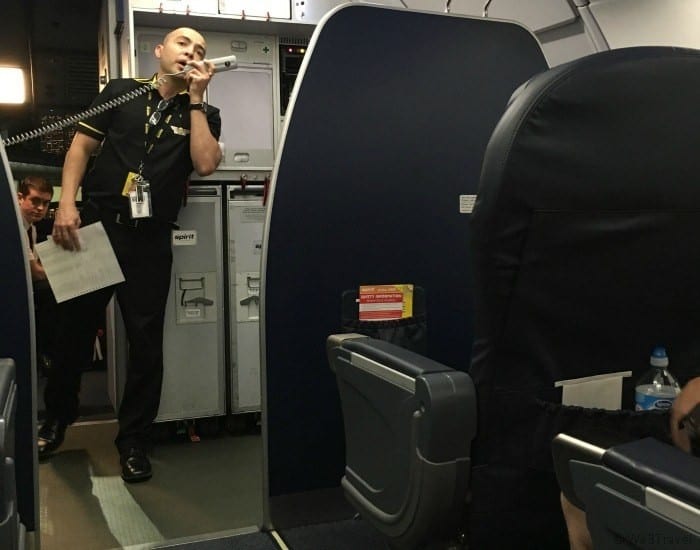 The only thing that tripped us up was the weight limit for the checked bags. Even though we were given one checked bag each, I thought I was being smart by packing Hannah and I in the same bag to have less luggage to deal with. Unfortunately, that smart idea nearly backfired as I hadn’t read the fine print carefully to know that, unlike most all other airlines, Spirit keeps costs down by having a 40 pound weight limit. Luckily the counter agents showed us some mercy and I’ve learned my lesson for next time. But really, the only grumbling I heard was in the check-in line in Orlando, where many passengers either didn’t know they had to pay to check a bag or they also assumed the weight limit was 50 lbs and then had to pay an overweight fee. This slows things down at check in so you’ll want to leave yourself a little extra time, especially at busy airports like Orlando. They do conveniently have self check-in kiosks and a scale right there to weigh your bag BEFORE you get to the desk.

Check out my tips for flying Spirit and book your trip on Spirit.com (sponsored.)

Playing and Staying at the Waldorf Astoria Orlando 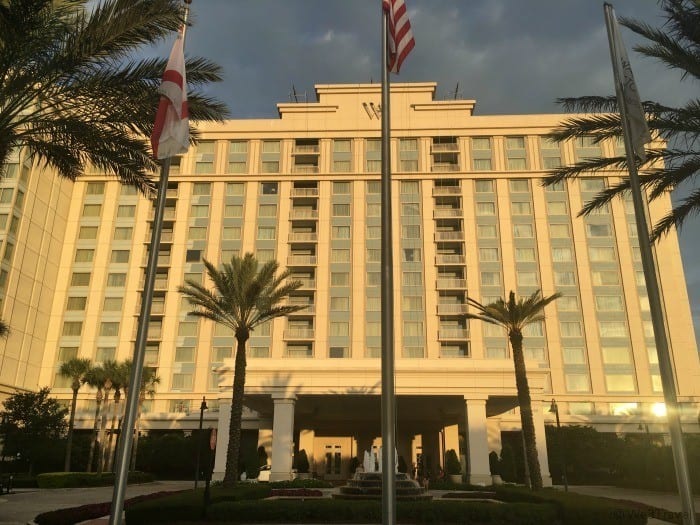 Saving on airfare means you can splurge a bit on a nice hotel. There are plenty of Walt Disney World 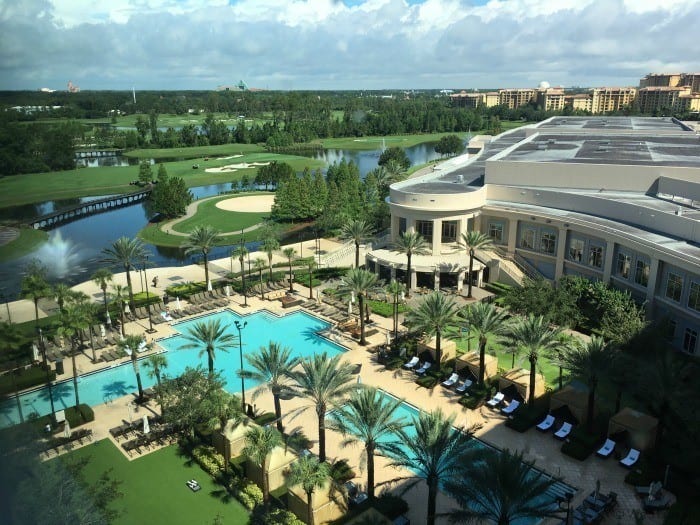 Not only does the Waldorf offer two pools (one which is heated), flanked with cabanas for rent; guests also have access to the pool complex at the Hilton next door. This features a lazy river and water slides, so there are plenty of fun options for kids. In the summer, the Waldorf also offers “Enchanted Evenings” programs from ice cream socials, RC car races, poolside activities, and more. It is always good to break up your time in the parks, even if you only have a few days, so we spent a day just enjoying the resort before heading over to Paddlefish in Disney Springs for dinner. 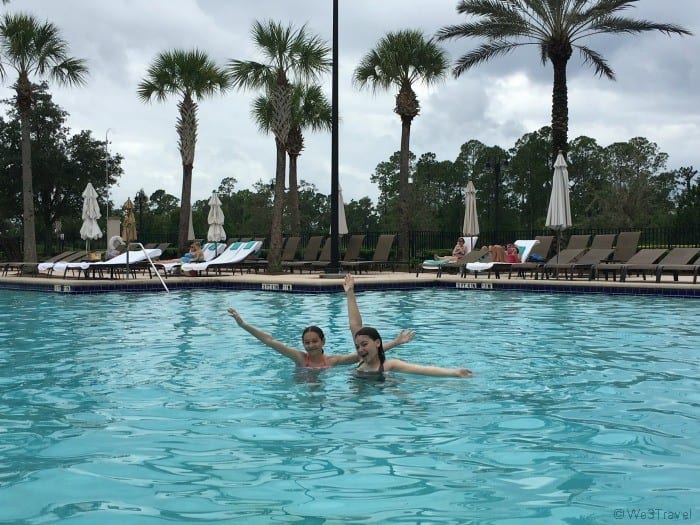 The rooms are what you would expect from a Waldorf, including extra large bathrooms with a soaking tub, stand alone glass shower and double vanity. Of course one of my favorite features was the view of both the Epcot and Hollywood Studios fireworks from our room. 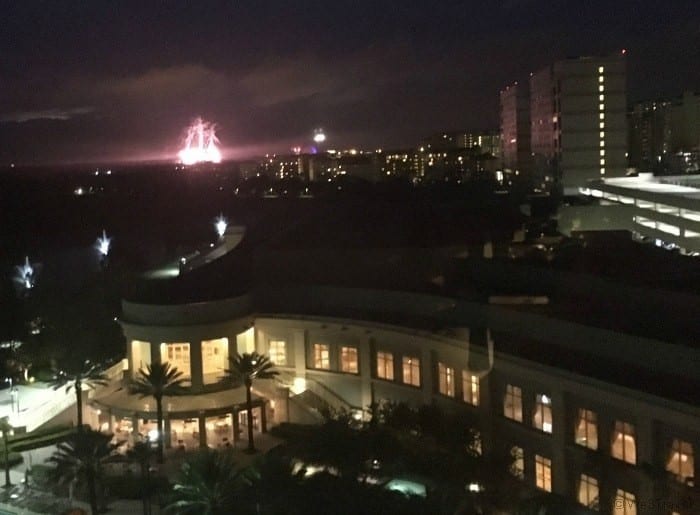 We were also impressed by the food quality. Unfortunately maximizing our time in the parks meant needing to skip the impressive breakfast buffet at Oscar’s, but we did enjoy poolside dining at Aquamarine. We were also surprised by the options and tastiness of the in-room dining. After a busy day at Volcano Bay, it was a really treat to order in room service, watch the fireworks and rent a movie. My advice though would be to bring your own to play on the in-room Blu-Ray/DVD player because in-room movies were $19.99 to rent! 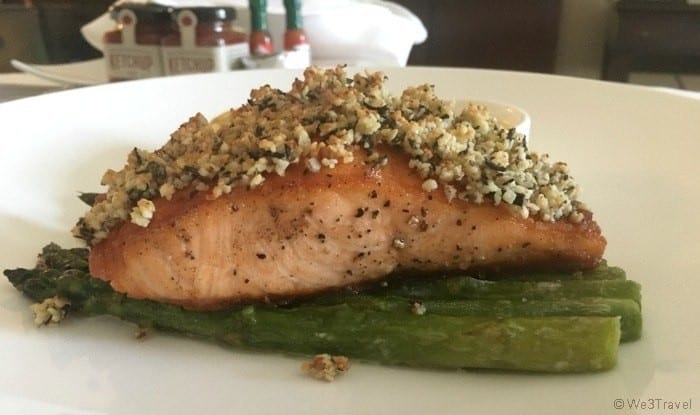 If you only have four days in Orlando, you might as well enjoy every minute with a stay at a nice hotel, right? Of course, if you are bringing a large group, you may want to consider renting a vacation home near Disney.

Four Days in Orlando: Maximizing our Time in the Theme Parks

With one day spent at the pool at the Waldorf Astoria Orlando, we had a lot of ground to cover in the theme parks. To do so meant hitting multiple parks in one day, which means the more expensive Park Hopper and Park-to-Park tickets — another reason to save with low-cost airfare. 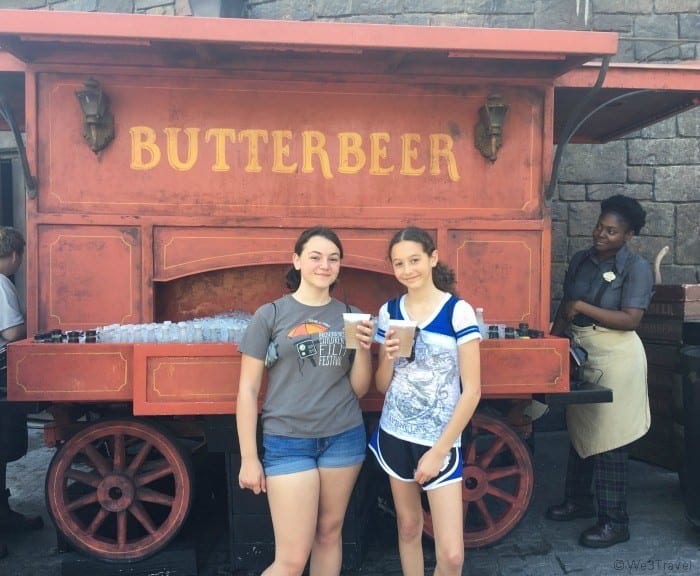 We spent one day at Universal Orlando using our Park-to-park tickets to split our day between Islands of Adventure and Universal Studios. Since the parks close at 8pm and 9pm, respectively, we needed to get an early start to avoid the crowds and maximize our day. As major Harry Potter fans, we arrived at park opening and made a beeline to Harry Potter’s Forbidden Journey in Islands of Adventure. (If you are hitting Universal for the first time, be sure to check out my insider’s guide to the Wizarding World of Harry Potter.)

In addition to getting our Harry Potter fill, we were able to check out the new Race through New York Starring Jimmy Fallon. Another new, not to be missed dining option in Universal is the steampunk, funky and delicious Toothsome Chocolate Emporium and Savory Feast Kitchen. 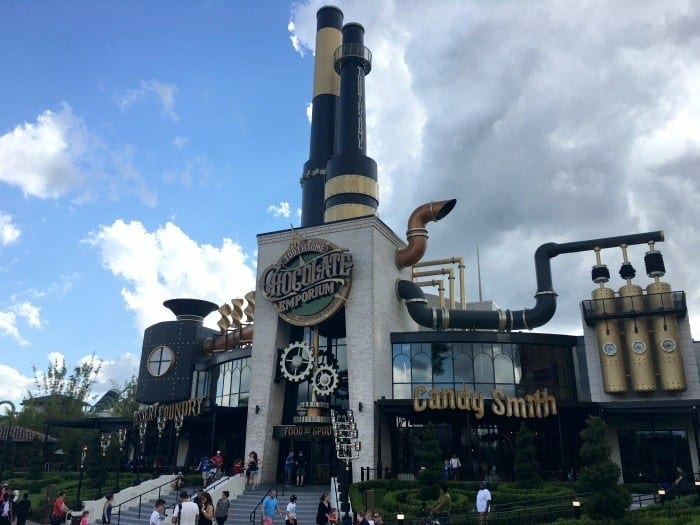 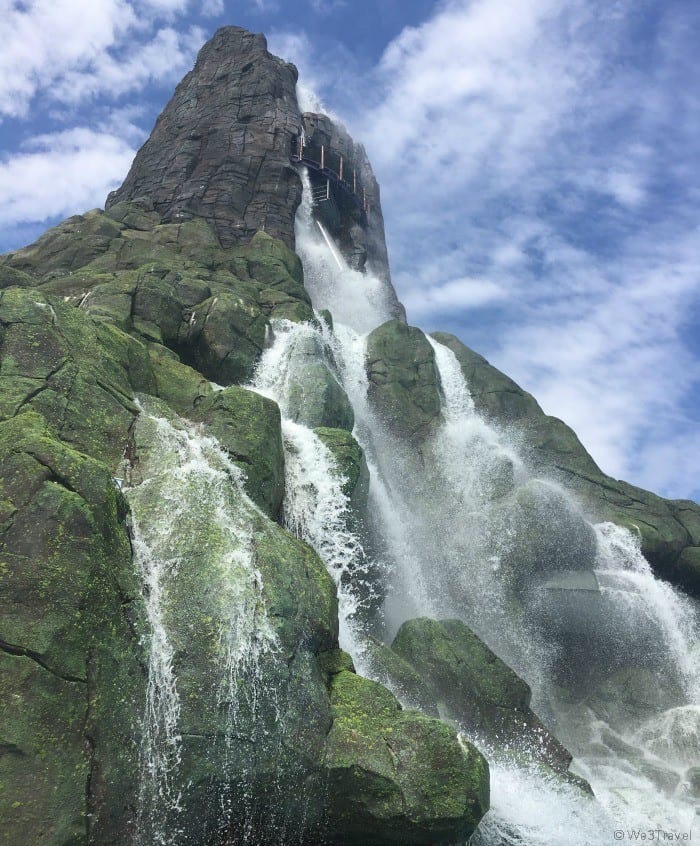 Our next day was spent at Universal Orlando Resort’s brand new Volcano Bay waterpark. This really is the best waterpark I’ve ever experienced and worth dedicating one of your 4 days in Orlando to a visit. But it is also very popular, so you will want to get there early. Make sure you check out my post and video about Volcano Bay tips before you go!

If you want to make the most of one day in Disney, you’ll need a Park Hopper ticket. But even so, don’t expect to hit all the Disney Parks in one day. We started our day early, arriving at Animal Kingdom before 7:30 am to get right in line to ride Avatar Flight of Passage (in my opinion the best ride at Disney.)

We spent the morning in Animal Kingdom, afternoon at Epcot, and finished up our evening with the Star Wars: A Galactic Spectacular Dessert Party at Hollywood Studios. Check out my tips for how to maximize your time if you just have one day in Disney! For even more tips, my friend Lesli put together an essential guide to Walt Disney World.

Be sure to check out my partner Getaway Today for discounted tickets to Walt Disney World and Universal Orlando! 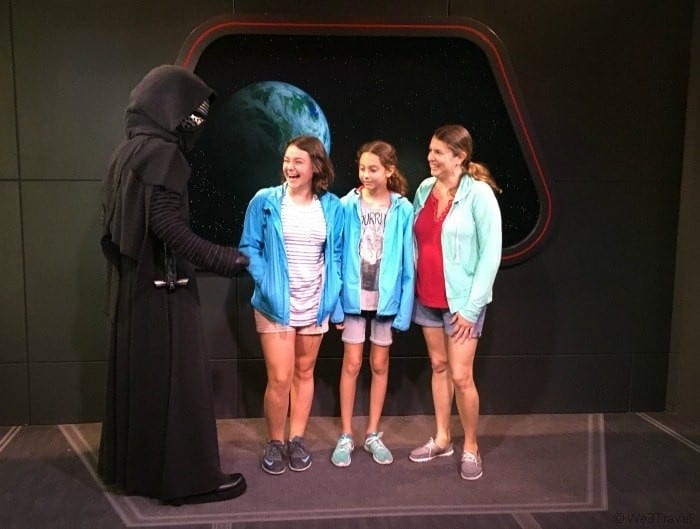 Unless you are staying in a Walt Disney World theme park resort, where you receive the Magical Express free airport transportation and free shuttles or parking to and at the theme parks, transportation can really add up. A cab from the airport will run around $75 and standard parking at the Disney parks is $20 a day. Add in the costs of renting a car and around $35/night to park at the hotel (at least at the Waldorf), and transportation costs really add up.

Since I’d rather spend my money on tickets and experiences, another way to make the most of your trip is by reducing your transportation costs (both airfare and car/parking fees.) Instead, stay at a hotel like the Waldorf that offers a Disney shuttle and use Uber or Lyft to get to other destinations. An Uber ride from the airport runs about $50 and rides to and from Universal Citywalk from the Waldorf are about $10-15 each way. 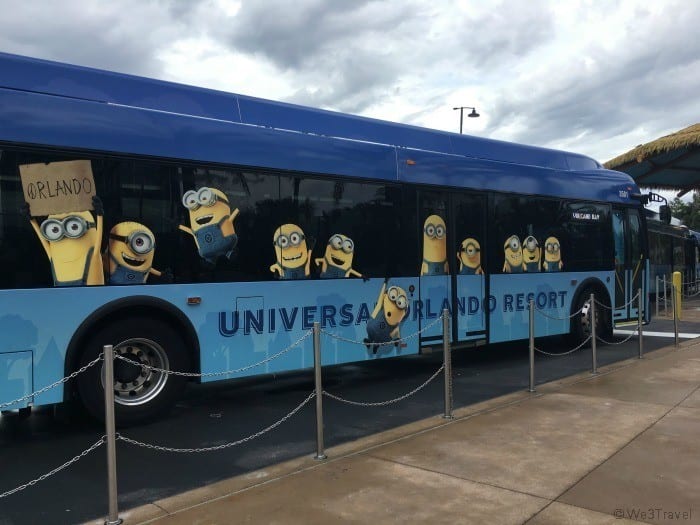 So we obviously didn’t see it all, but the good thing about Orlando is that it is a place that you can come back to again and again. I’ve already made a promise to return when the new Star Wars land opens at Disney’s Hollywood Studios! 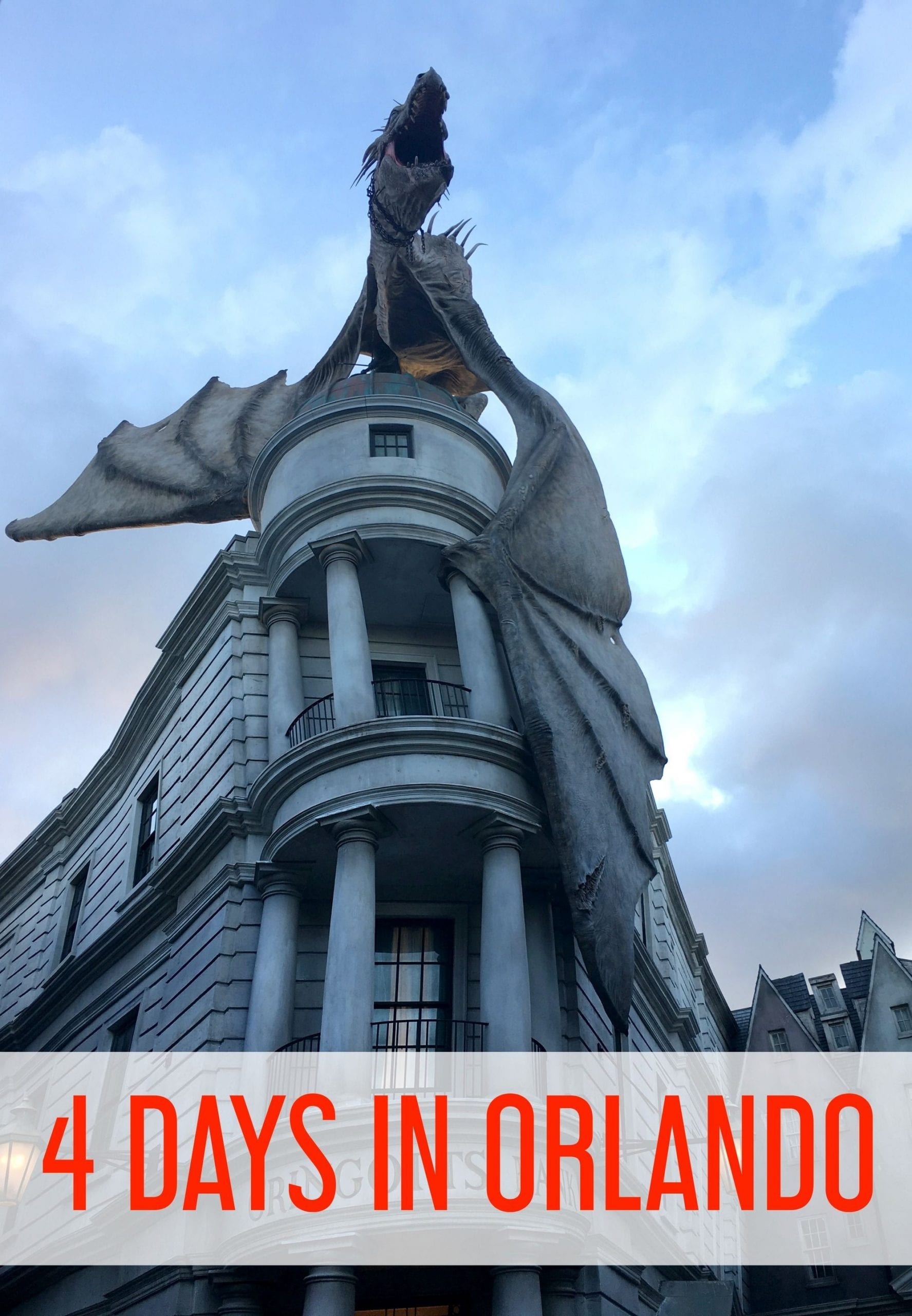 This post is sponsored by Spirit Airlines. We were provided airline tickets and compensation in return for a fair review. We also received a media package at the Waldorf Astoria Orlando and two media tickets to Disney. All opinions are my own.