Wondering what to do in Barcelona with kids? Read on…After three days in Barcelona, we had already seen so much…the Picasso Museum, the Gothic Quarter, Gaudi’s masterpieces, La Boqueria, Las Ramblas…but there was so much more to see. After all the intense sightseeing, we were ready for a change of pace.  So we hit the beach…at least for a walk.  Our apartment was about a 10 minute walk to Barceloneta.  Barceloneta reminds me a bit of Venice Beach, CA — very artsy, funky and cool.

On the walk over you pass the docks where the yachts and cruise ships are in port.  From there you can see the cable car that runs from Barceloneta to Montjuic, which is when we realized there was no way I was going on that, let alone my acrophobic husband.  It is so high and so long you can barely see the car traversing between the giant posts.

The beach itself is nothing truly special, coarse yellow sand makes up the short beach.  The water is fairly calm and clean, but there is a steep dropoff to deeper water.  We weren’t there to swim, but it was nice to put our feet in the water and stroll down the beach.

We were first planning on stopping for lunch at Can Manel la Puda for some beachside paella, but we weren’t quite hungry yet so we decided to walk along the beach a bit further. The further we went, the more we wanted to see what was that giant golden fish shaped building at the end of the boardwalk? (Turns out it was designed by Frank Gehry for the 1992 Summer Olympics) Once we finally arrived we were starving but there were plenty of beachside restaurants along the way.  You could tell that this area transformed into a club scene at night by the decor.

We ended up at CNC, where we enjoyed some more tapas including a Spanish tortilla (omelette with potatoes and sometimes other ingredients — a great staple for picky eaters.)  I also had my favorite gazpacho of the trip, perfect for the warm day. After a long walk, we really needed a siesta (and I needed to do some laundry before we headed off to Sevilla the next day.)

After some downtime, we were headed to a new area to explore, southwest of the city center where you will find the Olympic stadium, Museu Nacional d’Arte de Catalunya, and other sites.  We started with a ride on the funicular up to Castle Montjuic.  Montjuic, which translates to “Jew Mountain” in medieval Catalan, is an old military fortress, first built in 1640 and turned into a castle in 1694. While there isn’t a lot to see in terms of the castle, there is a fabulous view of both the harbor and the city.  I’d recommend taking the cable car up and then possibly hiking down if you wanted to spend a day in this area.  In 2007, the site was turned over the city to be used as a municipal facility.  The night we visited, they were setting up for an open air concert.  In addition to walking the gardens and grounds, you can climb up to the top of the ramparts for a terrific view.

We didn’t have a lot of time for hiking so we took the funicular back down the hill.  We decided to walk past the Museu Nacional d’Arte de Cataluyna, with hopes of seeing the Montjuic Fountains. They say it is beautiful to sit on the steps of the MNAC and watch the sunset and catch a show of the magic fountain.  Unfortunately, the fountains were dry so it was time to move on.

Our reservation for the evening was at El de Tablao Carmen for dinner and a flamenco show.   Tablao Carmen is located in Poble Espanyol, an open-air architectural museum.  Poble Espanyol was built in 1929 for the Barcelona International Exhibition as a model village to depict the different regions and architectural styles around Spain.  (Think Epcot for Spain.) While some tour books recommend Poble Espanyol as a must see, I would say it is an easy to skip attraction.  Much better to spend time driving around and seeing the real thing.  When we finally arrived at Poble Espanyol (taking a cab would have been a better idea as it was much further than it looked on the map), it was pretty much deserted except the other people there to see the show.

Tablao Carmen was about what you might expect from a dinner show.  Timed seatings, banquet style food served quickly to get to the main event.  You don’t go for the food — you go for the flamenco.  It reminded me a bit of when we went to the Moulin Rouge in Paris.

The flamenco was excellent, at least in our uneducated opinion.  The foot pounding, soul wrenching song gets you deep inside.  It also makes a huge impression on the kids.  To the point that our daughter dressed as a flamenco dancer for Halloween months later.  Next time, I’d like to stop in one of the smaller flamenco bars in Sevilla and see how it differs.  For this trip, being able to make a reservation when we had a free night was worth it to ensure we got to enjoy this Spanish pastime. 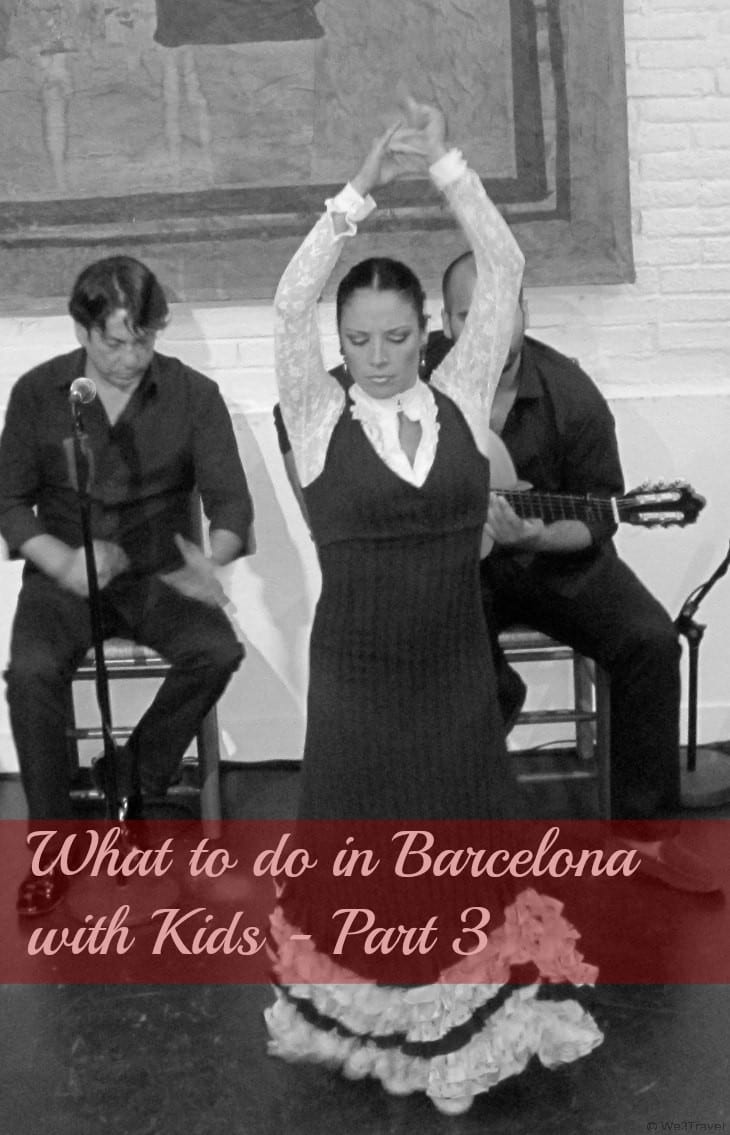 That wrapped up our four days in Barcelona…next, we moved on to Andalucia (Sevilla, Ronda, and Granada)and later Madrid.